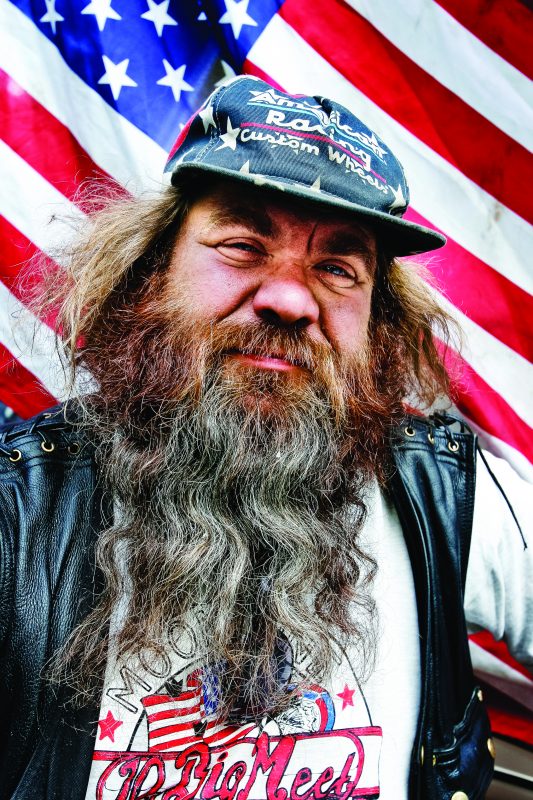 The biggest pop tribe in Sweden isn’t indie kids or techno heads. It’s made up of people who adore Chuck Berry and drive vintage cars. Meet the raggare.

In high summer, on a Friday night at Stockholm’s grand Sveavägen Avenue, you could easily believe Rebel Without a Cause or The Wild One are being remade. The quiffs, classic cars and 1950s clothes aren’t for show, however. These people aren’t costumed extras, they are raggare, members of the largest pop-culture tribe in Scandinavia.

Rock’n’roll never died for the raggare: they are still devoted to the music, the fashion, the aesthetics. For 50 years they have kept its spirit alive, but where rock’n’rollers in other countries have dwindled into small groups, in Sweden they have gone from strength to strength – there are now estimated to be half a million of them.

The first raggare would travel in convoy from one hick town to the next to beat lumps out of each other and ogle the women. The movement is part of the mainstream now, its most visible manifestation the 50s and 60s US cars the raggare still drive and the vintage clothes they wear. You can have three generations of raggare within the same family, and there was no more eloquent statement of raggare respectability than the 12 kronor commemorative raggare stamp issued by the Swedish post office a few years back.

Burning Wheels is just one small chapter of Sweden’s raggare and only has 15 members – more of them older than younger. They meet every Sunday at de facto leader Georg Gado’s garage to rev their engines, play rock ’n’ roll records and talk about the 1950s, while their children run around getting ice cream hand prints all over the car seats.

But it wasn’t always like this, according to Georg, 57. In the early days wheels meant freedom, parties, drinking, races and fights. “We used to meet up for rumbles between different gangs. No weapons or martial arts really, and if you fell on the ground it was all over and everyone would go for a drink.”

The raggare are what happens when one country develops an emotional attachment to another amid opposing changes in economic fortunes. When the oil crisis hit the US in the 1970s, transforming the nation’s fortunes overnight, rural Swedes bought up chunks of their culture – mainly big cars like Buicks and Dodges – and started living out their own rock ’n’ roll fantasies.

For young Swedes, these giant American cars, which contrasted with the safe, boxy Volvos their parents drove, were the ultimate symbols of rebellion. And they were dirt-cheap. “They were stupid,” Georg says about the Americans. “Some of the cars were limited edition. They built maybe 70 of them and they were selling them to us for a few thousand when they were collector pieces.”

Georg picked up his first US muscle car, a black 1965 Pontiac, for $2,000 in Los Angeles in 1980. He found it in a lot, rusted and part-inhabited by a eucalyptus tree. By the time he’d shipped it home, sourced original parts, resprayed and kitted out the whole body, it was worth 20 times as much, with an engine that purred and a stereo that roared. The latter is the only concession to modernity acceptable in a raggare’s restored car; music is a huge part of the culture.

“You don’t exactly want to have hip-hop playing from your car when you’re cruising,” says Martin, who drives a lime green Chevy with a top-of-the-range sound system hidden inside the glove compartment. He listens mostly to Creedence Clearwater Revival. “That music came from a period when America was really great. You can hear it in the lyrics.”

An average 5,000 cars are imported into Sweden from North America every year and the country now has more restored classic cars within its borders than anywhere else.

“We’re even getting some Americans buying back the cars,” says Georg. “They come to Sweden looking for classic Buicks and Cadillacs because they are in better condition here.” They also come to find spare parts. Rare wing tips and original fittings are more likely to be found at the back of a Swedish barn than in a US garage.

He’s not wrong, and the raggare meetings across Sweden – where members parade their tail wings like tail feathers, talk shop and trade cars – attract raggare from across Scandinavia and even Russia, the latest nation to join the bandwagon. They line up their vehicles, have picnics on the bonnets and listen to their classic rock’n roll albums till their car batteries pack in.

The biggest event is of course the Power Big Meet in Västeras every July, the largest gathering of American classic cars in the world, attracting over 10,000 vehicles and thousands more visitors. But on every weekend, in town centres, car parks and petrol station forecourts up and down Sweden, raggare display their American mean machines and comprise older members who have been doing it since the late 1960s as well as a younger generation, especially located in and around Stockholm, where raggare take over Sveavägen on the last Friday of every month.

When winter comes around, the majority of raggare go into hibernation. They tuck their Buicks under blankets, slip off their blue suede shoes and pull on their snowboots. And the next time they pull out of their driveway with Chuck Berry on the stereo, it’ll probably be in a nice warm Volvo.