DoMa moves out and back in again 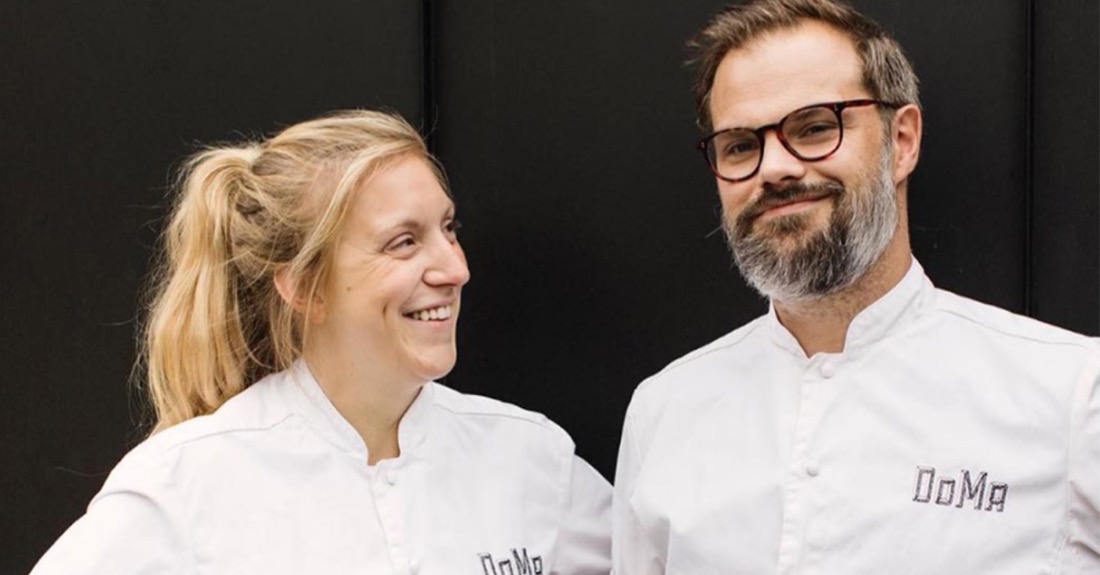 The restaurant DoMa previously situated in its owners’ home has now moved downstairs, and into proper restaurant premises on Östermalm.

Tea Malmegård has a lot of strings to her bow. As well as participating in a couple of TV shows and releasing a book on desserts, she has also created the Audible-exclusive podcast series Behind the Menu, best described as a hybrid between a documentary series and Chef’s Table.
Early February she, together with Viktor Lejon, opened the doors to their own restaurant DoMa, situated in an old printing house on Nybrogatan 48. I knock on the door some time after lunch and after a few seconds Gerd, their gem of a dog, greets me with a wet kiss. Tea shakes my hand and welcomes me inside. The homemade tables are already set ahead of the opening weekend. We sit down while Gerd settles on a warm blanket while looking at me with large, dark, eyes.

How did the idea for DoMa come about?
We had just moved in to a large apartment here in the house. With such a large apartment, a large rent comes hand in hand, and we began thinking about ways how to solve that problem. That’s when we began offering bookable dining sittings around our private dining table. That went so extraordinarily well that we put up more dates. And the more dates we put up the more guests it generated. We really had a full-on restaurant in our living room, which obviously wasn’t very clever, but it was a lot of fun! Both Viktor and I were tired of fine dining. We wanted to recharge our batteries and find our own style within cooking. It was a more playful way of running a restaurant. We felt that it was a good way to find who we really wanted to be within the restaurant trade. When we had our first child it wasn’t any longer possible to do the sittings in our home. And then we began chasing the dream of having our own restaurant.

So how does it feel now that you have reached that point here in Stockholm?
Today is the third day since we opened and I just stay very humble towards the fact that so far it’s been a lot of fun. But it’s no secret that there has been a lot of hard work behind it, for over a year before the opening. So it feels fantastic to be able to harvest the fruits you have planted, to see the guests come in, and to get to cook on a daily basis.

After first doing it in your own home, how important is the homely feeling for you?
It feels very central to us. We have carried everything we own downstairs to the restaurant. All the chairs, all the books, all the art is now decorating the walls down here. The apartment is empty. People have asked us what food we will cook but we have focused on creating a place where everyone can feel at home, safe and comfortable. Of course we want to serve super fantastic food and nice wines too, but the first step was to create a great and welcoming first impression and feeling when you first open the door and step inside.

Finally, what are your expectations and vision for the future of DoMa?
I’m hoping that we’ll have a restaurant that’s full of satisfied and returning guests. Not returning as in once a year, but rather twice a week. Long term, we’ll do breakfast and lunch here too, that will be so much fun. We want DoMa to be an open home for all, to become a place where anyone can walk through the door and feel welcome at home with us!