From Skatepark To Record Shop Window: A Conversation With MANDER 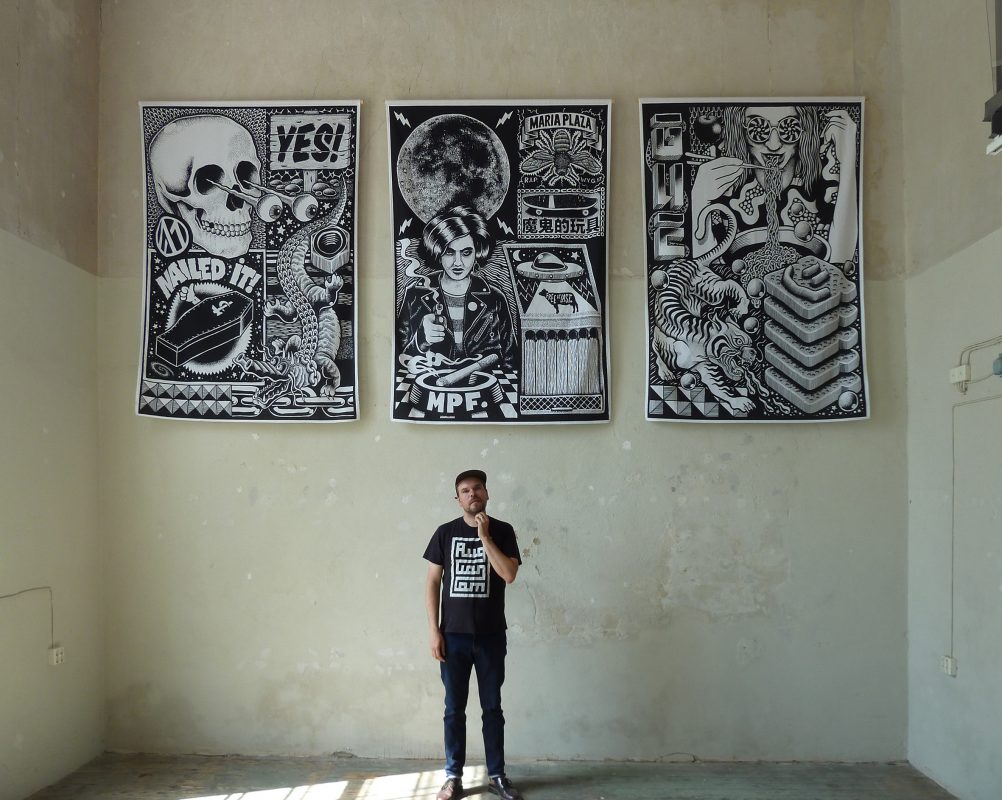 You might not be familiar with Martin Ander’s name, but you’re certainly familiar with his work. As MANDER, his illustrations can be found on skateboards, concert posters and in record stores in Stockholm and in other cities around the world. Starting out in the Stockholm skate and graffiti scene in the late 80s and 90s, Ander has produced designs for skateboards, tour posters and record sleeves for the likes of Fever Ray, Håkan Hellström and many more. He now has a book on the way. OUFF! is a compilation of some of the best examples of Ander’s work, and we caught up with him to talk about it and his career to date.

When you were growing up, how did you get interested in illustration?

I kind of grew into it. I’ve always been interested in drawing and art. My dad was an illustrator, so I knew that that it could be a job.

You’ve spoken about being surrounded by comics as a kid. Do you think they influenced your style?
Absolutely, you can see traces of all the comics I read as a child in my work.

How would you describe the skate and graffiti scene in Stockholm when you started out in it?
I started skating and became interested in graffiti in the mid-eighties, when the second wave of skateboarding was booming and the first wave of graffiti hit Sweden, it was an exciting time. Exploring the city, looking for skate spots and memorising graffiti pieces, I didn’t start painting myself until the early nineties.

How was it to be a part of the graffiti and skateboarding communities in Sweden in the early 90s, under the no-tolerance policy? Do you think working under that no-tolerance policy affected you as an artist?
In the early nineties, the colourful skate scene of the eighties, with vert ramps and rock star pros died out and made way for the new more technical street skating scene. Younger pros with snotty attitudes and a new bag of tricks, took the stage. New companies with a F-U attitude and a whole new aesthetic took over the market from skate moguls. The new skate scene of the early nineties wasn’t crowd pleasing, it was for skaters by skaters. Skateboarding’s popularity decreased until there were only a few of us left. In Stockholm we were a tight-knit group of about 30 people, skating parking garages and the remains of the 80s skateparks for a couple of years. Around 95-96, the ugly style of early 90s skateboarding and skate fashion had gotten so polished that it caught the eyes of the public again and started growing. Skateparks were built, business was booming and skaters grew to stardom. Now, it’s bigger than ever. 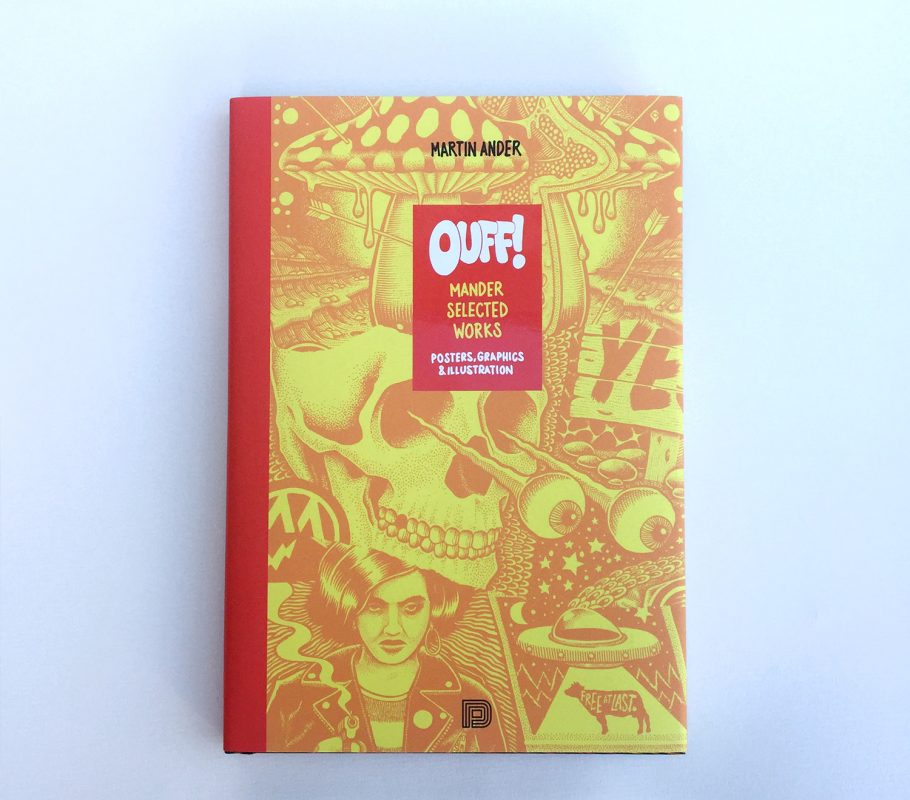 The graffiti scene in Sweden almost went through the same transformation. In the eighties, big, colourful, super-complex, wild-style pieces were the norm. But due to the zero tolerance policy, the writers needed to be quicker. Probably there was also the fact that the new generation had different taste than their predecessors. New styles and letterforms started to appear. Simpler built, almost ironic takes on classic graffiti styles became the norm.  The early nineties were about experimentation. In the late nineties the experiment was ready to become a thing again. Graffiti and street art became popular, graffiti shops opened and the legal walls was crammed with people.

I’ve always been more interested in the aesthetics and the social part of graffiti, rather than the adventure of hard core painting, so the zero tolerance policy didn’t affect me so much personally even though it sucked when iconic pieces got buffed (removed) and art shows got raided (yes that happened). Of course when all the legal places to paint got shut down it was a bummer, but we found new places where you could paint in broad daylight and hang out and party.

You later moved on to working with poster art. Do you think the leap between graffiti and poster art isn’t that big? They’re both a kind of street art that depend on catching the attention of passers-by.
Yes, it has got a lot of similarities, having a background in graffiti and an interest in composition and letter forms has definitely helped me in my poster work. The driving force of wanting people to see your work is totally the same. I get the same kick out of seeing my posters or designs all over town as I got seeing my piece on a wall.

How did you get involved in working with design for musicians?
When I was younger many of my friends had bands or were club kids, I started out doing their flyers and xeroxed posters. As we grew, the work grew too. And being a social kid who liked to party and go to clubs gave me many friends, friends who later became promoters or artists. 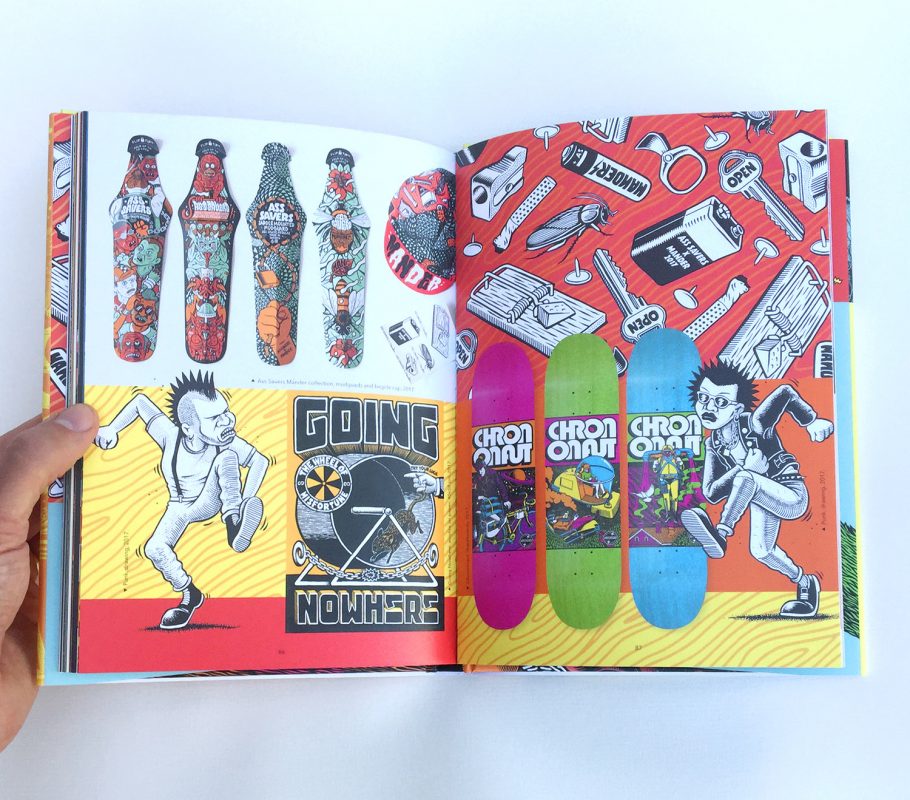 How does it feel to be someone whose art has a presence in the real world, via posters, album covers, skateboards etc? How does it feel when you see your art out in the world?
I love it. It’s awesome to see your work in the real world, or to know that your skateboard graphic is hanging on the deck wall in every skate shop in the world. Even though you get used to it I still get hyped every time I see a kid in a skate park riding one of my designs or see someone in the streets wearing my design on a t-shirt. But the coolest thing is when I have had poster campaigns up, and the posters are missing. That’s means someone has stolen them to hang on their wall at home.

How does a typical project start for you, and how does your average process work?
Usually it starts with an email or a meeting with a brief, then I send sketches. When the sketch is OK’d I ink it, colour it and then send it to print.

At this point in your career, which of the different kinds of projects you work on is your favourite? What differentiates them from your point of view? How different is the approach you take into each?
I have the same approach to all kind of jobs. You never know, sometimes doing infographics for a big corporation can be as fun and rewarding as doing an album cover for a cool artist. It’s not as much what kind of job it is, it’s more about how I connect with the client. But I do like the jobs where I get to work with ink and paper the most.

What do you think of the state of skateboard and graffiti art at this time? Do you feel the fact that both cultures are much more normalised and accepted now, compared to when you started, that they’ve become sanitised and some of the energy has been lost?
I think it’s great that both of the cultures is growing, even though there is city-sponsored graffiti festivals and skateboarding is in the Olympics, there will always be people who paint walls by the train tracks and skate curbs in a parking garage. There’s not just one scene anymore, there’s are many scenes within the scene.

How did the idea for the book come about, and what are you trying to capture with it?
I’ve been working on and off with Dokument Press since the early nineties. They started as one of the first graffiti magazines (UP, f.k.a. Underground Productions) then it morphed in to a book publisher. I’ve done loads of book design for them and we are close friends. Over the years, they have done some books about specific artists. About three or four years ago my editor Björn Almqvist asked me if they could do a book about my work, but I wasn’t into it. I thought it was too big of a thing and that I wasn’t worthy of a book of my own. Then he asked me two times a year until I finally agreed. I’m happy he didn’t give up. For me making a book that collects my work is a way to reassure [myself] that it will not be forgotten. One of my biggest fears is that my studio has a fire or a break in and I lose all my originals, now I know that most of it is collected and spread out all over the world.

How has it been to look back on your career through putting the book together? Has it made you understand your development as an artist more?
Yeah definitely. I also discovered that I have been on the same path since I was 15 years old. It’s just the media that has changed. I can see it what project it was where I learned specific techniques or discovered a new pen. That’s pretty cool.

Finally, what advice would you give someone looking to start a career as an illustrator?
Be social, get to know lots of people from all walks of life while you’re young. They are your future clients. Learn the basics, study the masters. Find your own niche, never half-ass your work, take all the chances you get, have fun doing it.

OUFF!  – Mander Selected Works is out now on Dokument Press.