Yaeger: “My Own Work Has Gotten Me Here, And That Feels Fantastic” 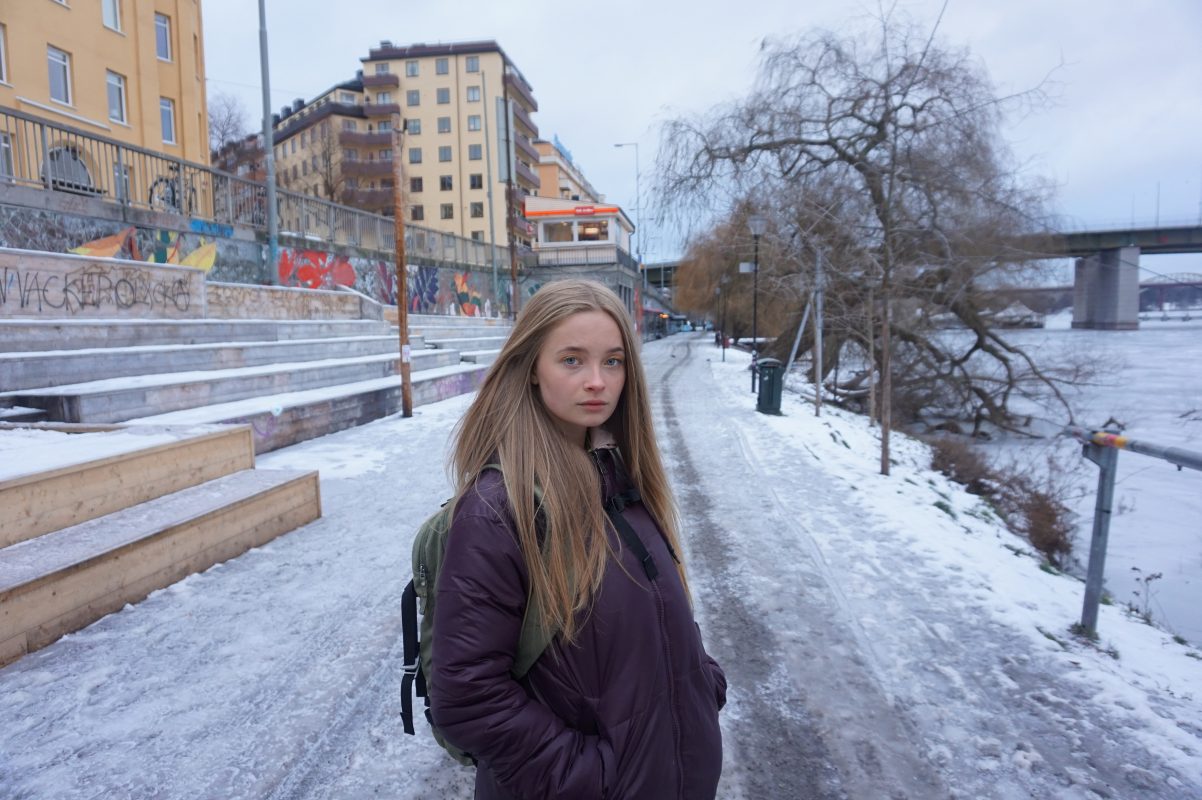 2017 saw the release of a song called Ocean, a slick, subtle pop song that stood out for its minimal, effortless swagger and breezy confidence. That was Hanna Jäger’s main note of introduction into the music world, and in the two years since then she’s established herself as a sure-footed, fast-rising new pop talent. January 25 is now D-Day for Yaeger, as that’s when she releases her first EP, Gul, named after the colour she’s built her aesthetic around. We met her to talk about it.

So we first met you in 2017 when you released Ocean. How did you get started in music, and how did Yaeger as a distinct project get started?

It started back in high school, I went to Rytmus and I studied music for three years. I’ve always wanted to work with it and I’ve always wanted to be on stage. In the last year of school, I wanted to start the project, but I didn’t know how to. So I met this producer, and we had our first session, and then we just continued and made a couple of songs. We got to the song Now You Know, which became my first single on Soundcloud. And he said ‘let’s just put it out there!’ And I said ‘well, how do you start an artist project?’ [laughs]. I knew I wanted to have my name, (Hanna Jäger), so we did. I took some photos with my cousin, set my artist name and just put it out there. And that’s how it started!

So a couple years later now, the EP is out on Jan 25. What can you tell us about Gul? How would you introduce us to it?
It’s an independent project. For me, this EP has been about studying the music business, because it’s a lot to learn. I knew I wanted to do something independent, and that that was how I wanted to start my career, to just go out there and just lay the foundation of who I am and who Yaeger is. That’s how it started. I’ve been working with a producer called Mona Khoshoi, and we just found each other and started making a lot of songs. And we said I should do an EP. Then Yaeger Yellow has been my branding for a while.

So it’s kind of a symbol of positivity for you? A symbol of you being yourself?
Yeah, exactly. Being independent me, without needing anything else really. Now, when I imagine myself onstage, or writing songs in the studio, I imagine it…it sounds weird, but through a yellow filter almost. It’s like the yellow filter goes up, and behind that there’s my world, my artist world. And that’s why I wanted to name it Gul. Because it represented everything.

We’ll focus on individual songs later, but the EP itself, how would you describe it, briefly? What are themes and topics, the musical styles?
Self-love. Being able to say yes and no. Independence as a whole I guess. Positivity. When I’ve been in the studio, that’s what I’ve wanted to write about. That’s what it is for me.

So, you’re releasing this EP independently, why did you go down that route?
Because I wanted to know how to do it. I’m always going to want to have control over my music and career, everyone should. For me, it’s about not having anyone going in and telling me ‘this is you’ or ‘this is what you should do’. That’s why. I’ve done all my PR on my own up to now, I’ve done my own management, I’ve set all my sessions up, I’ve done all the networking, pretty much everything on my own. My own work, since the last year of high school, has gotten me here, and that feels fantastic for me.

You’re steering the whole ship, kind of?
Yeah. And it’s been fun. Now, I’ve just started working with management, and I have plans for releases this year with labels. I’ll have my first single released via a label, so that’s exciting. So I’m ready now, to build myself a team.

Does it feel like you hard to get this EP done independently, and then after that you could move onto working with other people? That you had to prove you could do it first?
Yes, it’s been my goal. And now I’m one week away from my goal! And now, when I’m building my team, they will already know who I am and what I’m about. So they can just do what they’re good at and develop what I’ve already built, and just make it better.

Onto the songs. You’ve got the bigger pop songs on the EP like Dopamine High and I Need A, but the one I wanted to ask about was Note To Friend, which is this really nice breezy, gentle rhythmic song, probably my favourite one on the record. Can you tell us a bit more about that one?
It’s a very clear subject, where I got my inspiration from, why I wrote it. I’ve got a lot of friends who’ve been in self-destructive relationships. And it’s just been terrible to see them like that, and you’re not able to do anything, except just say you’re there for them, and that you’ll always be there for them. But I’ve had so many friends where I’ve been like ‘You’ve got to break up with them! You’re not yourself!’, and it’s so hard to stand on the side of something and be like ‘what is he or she doing?’. And I really wanted to make it happy.

Because that’s the thing, it’s a dark subject, but a really happy-sounding song.
Exactly! The friends are singing in the end, and it’s a really happy song. But that’s what I’ve had to do. You can’t be mad at your friend because they’re in love with someone who’s bad for them. It’s their choice, but it’s not really their choice at the moment. They’ve just got to realise, and you’ve got to stay positive and happy. I want to get that message out, to people who are in that position in their relationship. If they hear a dark song, then it’s going to make them feel bad, they’re not going to take it in. That’s why I do music, I want to get a message out there. Help people out.

Musically, and I think this is a theme that’s strongest on Note To Friend. Your musical style in general is quite minimalistic, and there’s a lot of air and space in the songs, and they’re built on rhythm and groove rather than being those pop songs that are like boom, wall of sound synths. So how did you develop that style?
I guess it’s from the music I listen to, and the fact that my lyrics and melodies are so central to me. I really care about what I write, and I want to get a message out. I usually have an idea of what I want to write about first, and then have them in top-liners.

So you write the lyrics first, and then form them into melodies? So you’re working from notepads and diaries or whatever?
Yeah, that’s what I do.  I have so many notes on my phone [laughs]. Yeah, I start from that idea, and then sing them into a melody, and then producer adds on the chords after. I guess it’s partially due to the producers I work with, but also because my lyrics are so central. With Ocean I had the whole melody and everything, so I just started recording it with a metronome. And then producer worked around that.

Do you think it’s from starting with the vocal melody first?
Yeah, I think so. Because then you have the idea. I find it hard to write over a production that’s already made.

And when you’re writing in that way and you have the space in the songs to do it, there’s a lot of room for your vocals in these songs. They occupy a lot of the space in the track, and a lot of the song’s personality comes from them. Something that struck me when I was listening was how much variation you have in your vocals across the EP. You’re doing a lot of different things with them – sometimes you’re barely even singing, a more talk-sing type thing, and then pushing it higher and harder and really going for it on songs like I Need A. So do you like to play around and experiment with your vocals?
I love it. I’m still developing my voice. You can develop your technique with a coach, but it’s when you’re in the studio that you find all the different corners that are unique to your voice, that are you. And that’s what I’m doing. For every song I write, I think I write it better. And it’s the same with my voice. I’m trying to reach higher, trying to reach deeper. And I love having a rhythm in my melodies as well. I listen a lot to Kehlani, and she plays a lot with her voice, so a lot of my inspirations do it too. I think it’s so much fun, because you don’t have one voice. I don’t anyway. It’s pretty much like how I dress, I can have totally different styles every day, just depending on my mood, and I think it’s the same with my voice.

So EP out on Jan 25, so where are you looking to go after that? Where do you want to go in the future, after Gul is out?
I’ve just started to work with management in London. So I will be releasing a single with a UK-based label, and I’m looking for a live agent. So I just wanted to build a team now, and go really big. And I want to play a lot live. Now I feel so confident about talking the next step. I have a really strong gut feeling, and I’m always listening to it, and now it’s screaming – ‘get to the next level!’

Yaeger’s debut EP Gul is out on January 25. Yaeger plays at the release party for the EP at Hilma on January 24.