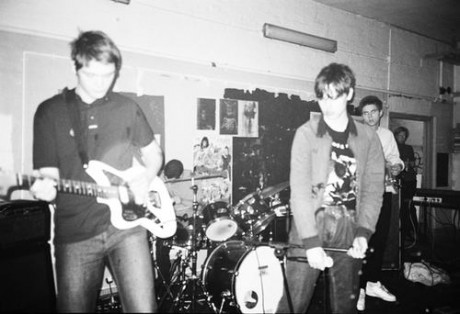 The term post-punk is something of a misnomer, as the genre (if you want to wholeheartedly embrace it as one) developed alongside the original seventies punk movement, retaining its DIY ethos, but thriving upon sound experimentation and a widened scope of musical ideas. If punk tore up the rulebook then post-punk put the pieces back together; but it was still unreadable. Almost impossible to recognize as its own subculture, post-punk eschewed punks intrinsically overt aesthetics and most would class it alongside new wave and goth, altogether more ostentatious trends. Often deliberately inaccessible, post-punk coupled dark atmospheric sounds with a fashion sense that was as plain as they come; all boyish haircuts and austere clothing.

With a proud history of Nordic youths rebelling against the establishment, it only makes sense that groups of Scandinavian sprogs are now banding together and reacting to the increased right-wing tendencies of their governments, or simply the ennui of their insipid urban landscapes.

Four schoolmates from Denmark, barely out of their teens channeling punk circa 1976, with a healthy dash of early eighties hardcore thrown into the melting pot for good measure. This is riot music in the vein of Crass and the youths also play around with fascist imagery in their artwork, tongue firmly affixed in cheek. Debut album New Brigade is a reassertion of the frenetic stop-start herk and jerk technically questionable music that emerged with the onset of punk. At just under twenty five minutes the record is a stab at the lavish excesses of modern music. It’s a tangible mess; seductive raw energy, blunt controlled riffage and suggestive but almost unintelligible lyrics. Imagery aside, the band is still very young to have a fully-formed proto-political agenda but the carnage of their live shows hark back to hardcore days of flinging bodies and wrecked venues (keep in mind, they also sell knives bearing the bands insignia as merchandise). Though they’ve achieved a solid level of buzz in their own right, with a recent signing to Matador it should be interesting to see how the hypemachine intends to portray them.

Saviours of punk or just disillusioned and impressionable young men? It’s too early to tell, but Iceage are doing something right.

Iceage will be selling knives and tearing up The Academy 2 on Thursday. Tickets are €15.

Merging the stark atmospheric nihilism of Joy Division with reverb slathered Robert Smith-esque vocal inflections, Swedish quartet Holograms capture a kitchen sink realism reminiscent of hard times gone by. Their self-titled debut is a product of caged-animal syndrome, putting a new age spin on the well worn concept of industrial boredom; apparently, the group all have day jobs on the factory floor. Lyrically, it’s all desolation, isolation and urban entrapment (Sweden’s Pride even attacks their country’s ancient history of Vikings, raping and pillaging) but the addition of shimmering vintage synthesisers diverts from all the malcontent.

If this may seem like weighty subject matter for such a young band, an unmistakeable attitude and infectious back-to-basics approach keep things interesting and give the album dark momentum. While they may come across as somewhat derivative, shamelessly cavorting with their lo-fi influences, the simple fact is that nothing is original anymore and Holograms provide a fresh take on old music through an assimilation of their peers and a cathartic punk swagger of aggressive indifference.