In Vino Päritas – The Sound of Soil With Lena Särnholm 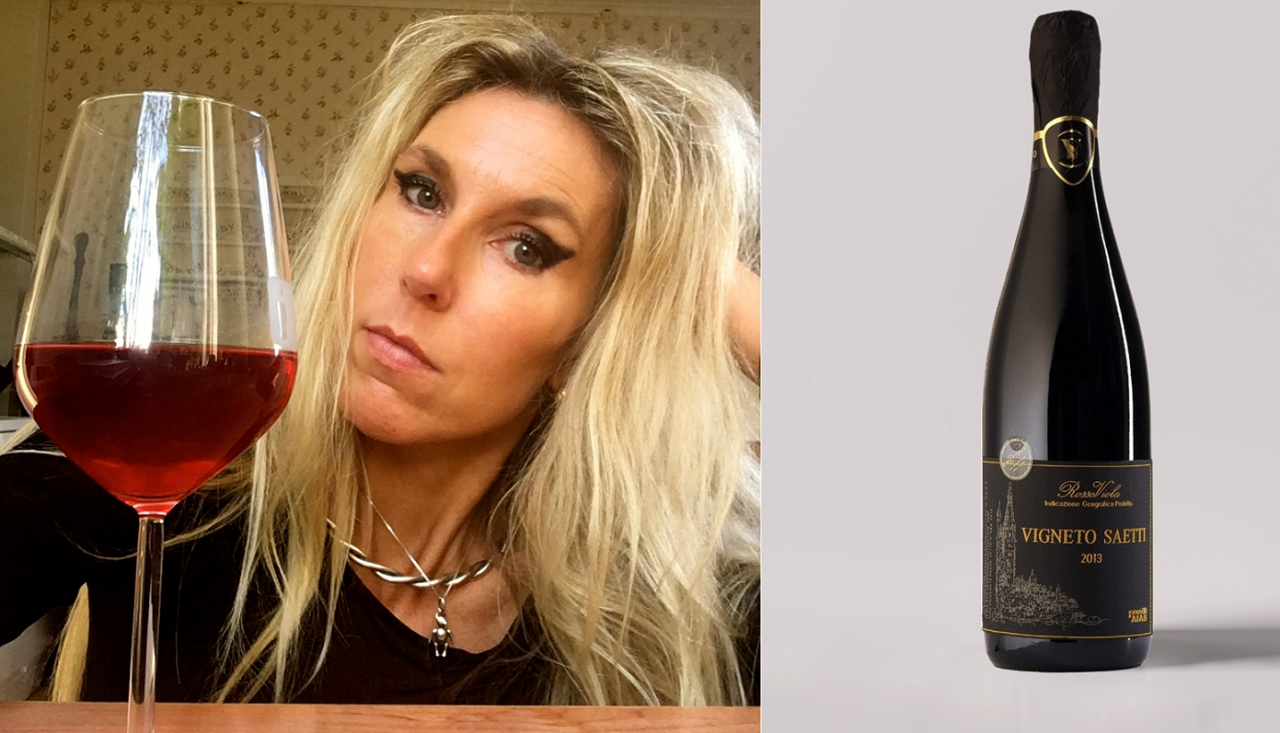 “I studied the sommelier course at Restaurangakademien, including WSET level 3 in 2016, and one year later I took a course at Södertörn University called ‘The evolution, history, economy, chemistry and biology of wine’. I’ve done several harvests too and my first was 2014 with Pithon-Paillé, JC Garnier, Didier Chauffardon and Benoit Courault. And then I started to travel, visiting wine fairs and farmers. It became my drug.”

If you are a regular on the Stockholm wine scene, you might have seen her scrutinising every wine list out there, trying, tasting and enjoying the selection offered. Lena Särnholm is a wine journalist, and the kind of wine blogger you still love to read. Her passion for hand-crafted wine- making and travel oozes from her every word. But her writing career didn’t start with wine, it started back in her native Karlskoga on an equestrian quest: “My background is not ‘winey’ at all. My passion was horses and riding, but also journalism. I started to write very early. I worked for some local newspapers, then for the Swedish Equestrian Federation, which led me to where I am today, at the horse magazine Ridsport in Trosa. Every autumn I went to the Loire for a big competition, and around ten years ago it was raining cats and dogs so they had to cancel the competition. And there I was. Stuck in the Loire for the weekend. So why not visit a winemaker? I had seen that they grew a lot of vines in the area. I happened to visit the humble Toby Bainbridge, as he spoke English. Before the tasting he showed me the vineyards. His was totally impeccable – his neighbour’s, on the other side of the small road, was covered with at least 20 centimetres of water. There and then I understood the meaning of proper farming, and later in the cellar we tasted the wine, which was like juice. I thought ‘Can wine be like this? If so, I want to jump on to the train’.

Her newfound interest rapidly grew into a passion. She started her blog three years ago, and it landed her an interesting position as a freelancer for Star Wine List, a platform for and guide to the best and most interesting wine lists in the world. Star Wine List was founded by Krister Bengtsson who is also an investor in the British wine bar and magazine, Noble Rot. Writing for and guiding people to the best wine lists out there for Star Wine List and her own blog are two different things, and the projects are no problem to combine. Lena’s blog The Sound of Soil (https://naturvin.wordpress.com/) is dedicated to natural wine and her travels and has a loyal following: “I started to publish my stories in 2015 and the first piece was from the Real Wine Fair in London, where I stumbled on Pyramid Valley’s orange wines. Again – a revolutionary experience that I wanted to share with others. Life is too short to drink bad wine! I wanted to tell people what wine – honest wine – really is, and explain the hard work behind the bottle. Wine is so much more than the liquid. It’s culture, history, emotions – wine has been with human beings for thousands of years. And it has also had a big impact on our lives; for example, it’s no coincidence that they started to grow vines in Champagne. I can talk for hours about this. I don’t know if my blog has any particular influence, but I hope the readers will get more respect for the vine and the wines. In Sweden most wine journalism focuses on the already bottled wine, how it tastes, its ageing potential and so on. I miss the storytelling – my favourite magazine is the brilliant British Noble Rot. They put wine in context”.

Writing for Star Wine List and giving tips about the best wine lists gives her a wide angle on what the wine world is all about, from brand marketing and conglomerates to the smallest natural producer. It’s the latter that captures her fascination: “The pure expression, the sense of not having a barrier between you and the wine – the texture, the sensation. For me, the feeling is more important than the flavours. What’s the wine trying to say? Does it speak to you? Does it get you going? Reactions? I think the current discussion about flaws and faults is very interesting. Let’s say if a winemaker actually likes some volatile acid – can you say it’s a fault in her/his wine? Sometimes I can fall in love with a wine whose flavours I don’t find to be anything special, but I love it because it has a self-confidence, there’s something in the personality that attracts me. It’s like art and music. Sometimes the reaction in itself, positive or negative, is good enough. For me, natural wine is more like a philosophy, an attitude. You don’t just go to the shop and grab a bottle – it’s a responsibility and an exchange between the customer and the producer. As a consumer you can not only buy the ‘good years’, you have to support the farmer even when he struggles and maybe must buy grapes. I hope there never will be a certification for natural wine – to tie it up with regulations would kill the spirit, the idea. Natural wine is for creative people with an open mind, regardless if you’re a producer or consumer.”

It might be hard to get around as a freelancer in the wine biz, but other tasks in Lena’s life compete [for her time]. Her working weeks are a constant logistic struggle but with that said, passion overcomes anything: “There are no ‘normal’ weeks for me and I think I am a bit unusual. I still work full time as an editor at the horse magazine, so I have difficulties in combining these things. I try to go to as many tastings as possible, and travel as often as I can. For me, the best way to learn is to visit the place and meet the grower. Then you really understand the wine. I have to do the wine writing in my spare time – evenings and on weekends. Luckily I don’t have a family and a horse (ha, ha). One day I hope I can work full time with wine, in some way.”

When you follow Lena on social media (@sarnholmlena), it’s obvious she knows her turf. Being out and about most of the time, finding out the best spots for drinking natural wine in Stockholm at the moment, it’s a great insider’s guide: “We have a lot of great bars in Stockholm. It’s difficult to name the best, but if you forced me to choose I’d say Vina, Tyge & Sessil and La Colline. Why? Vina has a living list, that’s changing all the time. Wines from small producers with a strong identity; some more funky than the others. Tyge & Sessil – same here, and what I especially like is that they have a few bottles of Lambrusco, a wine type that is totally underrated. A proper Lambrusco is not sweet at all! And La Colline, where the head sommelier Anna Mellfors has the ‘fingertip instinct’ to find the little natural gems.”

As a professional in the wine biz, studiously checking every wine list she comes across, I’m curious about her views on Swedish sommeliers and their work with wine lists in general. Are they as generic as one would assume or are there a lot of differences between the best lists?
“As I’m not a professional in that way, I won’t say too much. But it’s happened a lot during the last years, though I still miss someone who dares to focus on one country/wine type. I think the market is ready, and big enough, for this. Well, you have one exception – Ambar, which focuses on amber drinks, but they also have other things. So, yes, in general it’s too generic. The tastebuds and the brain need a challenge. Another thing – you find the same names spinning around. Julie Balagny, Frank Cornelissen, Jean Foillard. I know Stockholm is not that big, and it’s quite trend-sensitive, but I would like to see more diversity. There are so many interesting wines out there.”

With her finger on the Stockholm wine pulse, Lena is the person to go to for an idea about what’s trending on the wine scene right now and what will end up in your next glass: “Sommeliers still talk about sherry and German riesling, and it’s good, because these wines deserves a place in every home. Here in Sweden I think Eastern Europe is the ‘new old world’, and the new generation from Australia and South Africa. Young guys who make fresh wines with balance. You can also see a return to the classics, like Spain, but now the focus is outside the famous regions like Rioja and Priorat. In general – people are curious! They want to discover new regions, new grape varieties. Abroad it’s the same, and I can also see a coming revival for underdogs like Muscadet, Lambrusco and Aligoté from Bourgogne. Even old Bordeaux is making some fun things; they are so untrendy that they are trendy again. Then of course you have the always sought-after Bourgogne. Talking about styles, orange wines has not reached its peak yet. They make white wine with skin contact everywhere, with all kinds of grapes. It’s good, because it shows another side of grapes that are stuck in a stereotype (like too green sauvignon blanc). Sauvignon blanc has fantastic flavours in its skin, just like Müller-Thurgau.

Speaking of what will be in your next glass, we asked Lena to name three wines no one should miss out on this summer.
“Three? Why not 30? First I must mention the wines from JC Garnier in the Loire. He makes marvellous chenin blancs, but they are difficult to find. If you can’t find it, try his Clavières 2017, a stone-fresh rustic marriage between Gamay and Pineau D’Aunis. Of course you must try a proper Lambrusco. Here you have everything you can ask for – bubbles, acidity, fruit and tannins. One of my favourites is Vigneto Saettis Rosso Viola (a Lambrusco di Salamino). The wine is a surprise in a bottle, just like the man himself. Luciano Saetti has three hectares and transformed an old fridge into a de-gorging machine. The last one is difficult. I would strongly recommend some orange, but cannot choose between Crocizias Besiosa 2016 and everything from the Spanish wonder Vinos Ambiz. And then you have my latest discovery, the Jura-look-a-like Mountain Chardonnay 2017 from Gentle Folk Wines in Adelaide Hills. Slightly oxidative, with a bit more matured fruit than in Jura. Stunning!”

The wines Lena is referring to are all to be found in Stockholm restaurants. Vina has JC Garnier, 800 degrees has Saetti, Ambar and Ebenist have Vinos Ambiz. Tyge & Sessil have both Crocizia and Gentle Folk Wines.