Suvi Makes It Through With New Album “Mad At Heart” 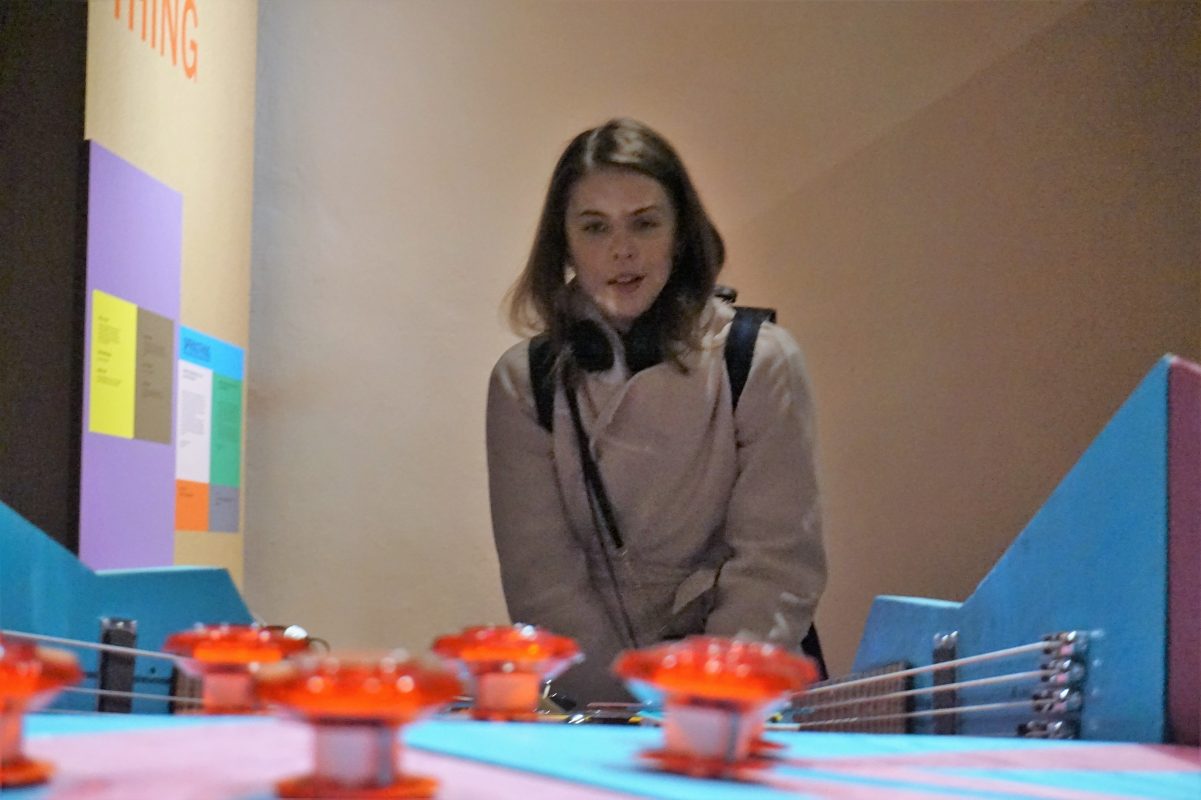 Finland-born, Sweden-based popstar Suvi originally hit success on the blog circuit with her singles Bleeding For Your Love and Find You in 2013 and 14, and was all set to put her debut album out. She then ran into problems, and it wasn’t until last year, when she released the dark, twitchy single Come Out And Play, that things got back on track. Now she’s just released her debut album Mad At Heart, and we took her to Scenkonstmuseet to explore the interactive instruments at their new exhibition ‘Sound Check: Make It Play’ and talk about the new record.

To start at the start of the process for Mad At Heart, we can go back to 2013 and 2014, when you released Bleeding For Your Love and Find You. After those singles came out, and you had quite a bit of success with them, you went into the studio and was ready to write the album. So what happened at that point?

We got a grant in 2012, so we had already thought that we would put out an album the following year, or quite soon after Find You in 2014. I had started working with my manager then. But at that time I was collaborating with a bunch of different songwriters, and the project had organically developed into being my solo project. The original plan was that I was going to play with them too, but they didn’t want to perform. Then once it became my solo thing, we hadn’t really talked it through. Because if I’m going to be the front of the project, then I have to start making decisions, cos It’s me that’s fronting it. Then the schisms started. We didn’t really fight, but it started getting more complicated.

Would you say it was difficulties in that transition, from being a group project to being a solo project, was what caused the delay?
It was first during Find You, that we started trying to establish the roles in the project. I thought it was great fun. The songwriters at that time were kind of like my band. They would be at songwriting sessions, rehearsals, even just listening in. But it started to take a toll. I had a manager, who was supposed to have been managing me, but really he should have been managing the band, which was a group of songwriters of three to seven people, and then the band, which consisted of six other people.

So at this point, during the Find You era, there are a lot of people involved, but it’s not clear what everyone is doing?
Exactly. And of course I was trying to start building my professional relationship with my manager, which was still in the baby stages then. So then I’m in the middle, and I’m trying to manage having a manager, and then all these songwriters who all have their own different views and wills and everything. And then the band, rehearsals, tour managing and releasing the songs myself and everything. So it got to the point where I didn’t really have time to be creative anymore. I was just trying to please everyone in the process. And so I went ‘fuck it, fuck everyone’. And I became an enfant terrible kind of a character and starting going out and doing whatever I wanted. And then everyone got fed up and decided we needed a break.

So this is happening sometime post-Find You. At what point does it start to get back on track?
Well, I should have probably gone to a stress rehab back then. But I took like a month or two of time off, which was terrible economically, but was very good for my heart and soul or whatever. Then I wrote to Kulturrådet, the arts council who gave the grant, and explained what was happening, and asked what we should do, because we were not going to make the deadline for the album. They gave us more time, though you only get some of the grant when the project is released of course. So I called my co-producer, and asked if he was up for finishing the album. This was 2015. Then we had basically finished everything by fall 2015, so it was done. But then management wanted to wait, as they wanted to get feedback from some people before we released it, and so we got some things like ‘mixes don’t really work’, ‘it’s too long’ and so on. So we were trying to change the mixes, and then I really hit the wall, in 2016, and had some severe depression, and couldn’t do anything for over a year. When I got out of that, it was just me and my manager Charles, who has been really supportive through the process. So I decided again, ‘fuck it, let’s get them out’. It’s been a really long journey, and I can’t say it’s all been fun and games, but it’s been an important process to grow as a songwriter and to understand more about the dynamics in a creative process.

If you take Bleeding For You Love and Find Me as the earlier part of your career, how would you say your sound has changed since then? Listening to the album, it sounds like there’s a darker, more experimental and clubbier tone to it.
Although, the songs on the album are old. One of them I started writing in 2009. We were almost finished with Oblivion when Find You came out, Lonely Bird was what we were thinking of releasing after Bleeding, and Balloon is from 2011.

So there’s no real linear time projection with these songs?
Some are later like Mad At Heart. It’s a song where the track and the chorus were almost done by two of the songwriters and a producer on the early team, and it’s about us. We were sitting in the café Fix at Fridhemsplan, we wrote the verse there.

It is quite a dark, clubby, experimental take on pop music, what do you think attracted you to that musical style?
Well, it’s still a mix of all the people who were involved. But I would say that I brought the darkness into the process in many ways [laughs].

I was going to comment on the genre diversity on the record, because there are huge differences between the songs. Something like Balloons and Come Out And Play are very different songs, but I guess the different writing teams contribute to that?
No, I wouldn’t say that. If you compare the teams on Oblivion and Balloons, half the teams are the same. Balloons is one of the songs that I wrote, the melody and the lyrics and chords, and then I and my producer arranged it.

So what would you say then accounts for the genre diversity on the record? Are you naturally attracted to different styles?
It’s been a jam session kind of process, and that’s what came out. I can’t really tell.

Would you say you’re comfortable operating with so many different styles?
I would say it’s been nice to try out. Now I think I’m heading into a more ‘I want to do this’ style for an EP.

So you can focus on a more defined sound?
Exactly, and let it evolve.

You mentioned in the press bio that ‘this album was the result of a journey’. Does it feel like Mad At Heart is a chapter from a section of your own life? And how does it feel to have that out there in the world then, that piece of art that stands in for a section of your life?
It feels like it’s easier to breathe. But it’s also fun. I listen to the songs sometimes, and they bring back memories. There could be a photo for each song. The photos and the cover art are actually pictures of my family from the 60s in Finland, that my grandfather took. So on the cover, there’s my grandmother and my mum.

You also said that the album feels like ‘a dream from another time or another life’. So does it feel like you’ve moved on from it now?
Yes, it feels almost trippy. It’s been a very intense seven-year period. It’s kind of bluesy and sad, but now I’m not in the middle of it I can look back on it, and it’s beautiful, because we had an amazing time, even if it was hard at times.

And if the story of this album was quite messy, does it feel like you now have a clear vision of what Suvi is as a project and who you are as an artist?
In a way, on a certain level. But it doesn’t mean that it has to be set or rigid. That it won’t change or move in another direction. But there’s definitely more of a core in the project.

With Mad At Heart finally out in the world, what’s coming up next?
I have some new songs, and I have a sketch of a short EP, and then an EP after that. So there’s already a sketch of the next one and a half years or so. Now that I’ve had to wait to get the album out, I’ve been able to write new music. I’ve heard that when people release an album, they don’t really have anything to follow it up. Now I know, I’m an independent artist, I have my own label, I have creative collaborations with other people in the music industry and other creative artforms. I can do whatever the fuck I want [laughs].

Mad At Heart is out now.