Lucy in the cellar with cocktails 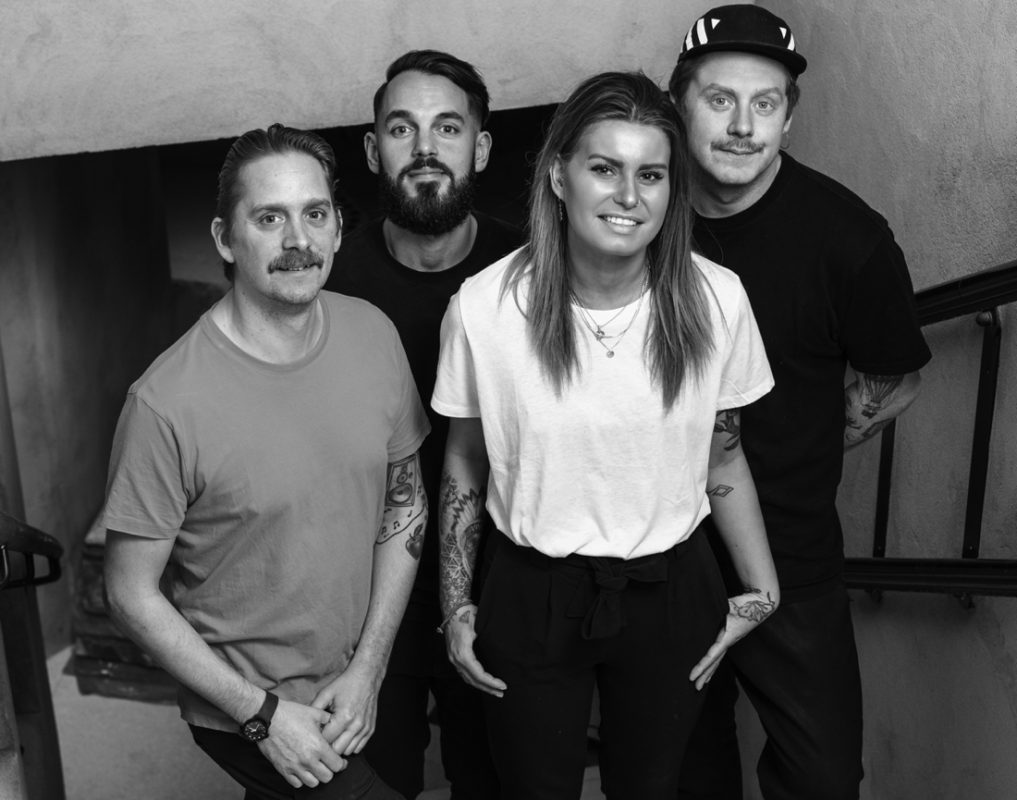 Some of Stockholm’s most celebrated bartenders have joined forces. The result is a formidable little bar underneath Arnold’s and Spy Bar at Stureplan. The name? Lucy’s Flower Shop.

We have over 500 Lucys in Sweden. I googled the name to find out it originates from Lucius and Lucia, originally meaning ‘of light’. But when you dig deeper you find that Lucy is someone who is beautiful both on the inside and outside. She’s a good friend. She never fails to make you smile. She understands. She’s always there for you and, apparently, without a Lucy in your life you’re nothing. I’d expect that all of this is exactly what new cocktail bar Lucy’s Flower Shop aspires to be.
Renowned bartending quartet Hampus Thunholm, Alex Skärlén, Ola Carlson and Linn Sterling have set about the task of creating something close to the perfect cocktail bar. Their aim is to create a special experience for the guest, and to stimulate all the senses.
Ola: To the unfamiliar bar visitor it will probably feel more like a restaurant visit than a bar visit, as you sit at your table and socialise with your company. It’s not a bar to mingle in. Of course you might meet someone and say hi but it’s more of a place where you’re with the people you’re here with.

I meet them on location at Lucy’s Flower Shop at the point where late afternoon morphs into early evening, on one of the first days they’re open. It’s small, intimate, and the first guests stumble in pretty much exactly as the clock strikes five. You probably know the feeling. Sometimes you can hardly wait to get that cocktail. And I mean it’s Thursday after all.
O: We have a smaller range than a ‘normal’ bar has. We work very much with what we serve, our cocktail menu. That’s the core of our business. Apart from that we work with classic cocktails of course. We just don’t do it all. Right now we don’t do Bloody Marys. We don’t feel that we need to. Same thing with coffee cocktails. We can do other things instead.
Hampus: We’ll grow slowly, to be able to keep everything perfect. We cannot serve everything and keep it perfect. Whatever people say, it can’t be done.
O: All the classics, built on spirits, liqueur, citrus, sugar, bitter, we do all of that, with some exceptions like Clover Club since we do a cocktail with raspberry that’s similar. Otherwise we work from our cocktail menu. And what shall we say about the menu?

You have developed it together, the four of you?
O: We stand together. It begins with someone pitching an idea, someone adds an idea half way through and then it ends with a third idea.

But it could be anything, right? It’s not supposed to lean on some theme? What about seasons?
H: We’re extreme in that regard. But it’s not like we’re a ‘Nordic bar’ or an ‘American bar’ or something with a certain type of menu.
Alex: You automatically work seasonally when you choose to work with fresh produce. But changing menu for Winter, Spring, Summer and Autumn, we don’t feel tied to that. If we like something and can source the produce we’ll do it.
O: We have decided, especially Alex and I when we began thinking about this project, before Hampus entered the fray, that we wanted to reinvent ourselves, and for the last year and a half we have thought about how we can make a cocktail today rather than how we have done it before. We wanted to do something different to what we did before at Bar Hommage.

Linn comes most recently from the Bank Hotel rooftop bar Le Hibou, Hampus, recently crowned Swedish bartender of the year, has worked up north at star chef Magnus Nilsson’s ambitious cocktail effort Svartklubben by Fäviken in Åre, while Ola and Alex worked together to rapturous applause at Bar Hommage, at the time a celebrated cocktail bar.

So how did we end up here, that the two of you were going to move on? How far back do we go?
O: I don’t know how long me and Alex have worked together… we were at Bar Hommage for four years, and for the last two we were talking about the next project.

Did the idea exist before you had the locale?
O: No.
A: Not exactly this idea.
O: The idea is adapted to the shape and location of the premises of course. What sort of atmosphere you want, how it should look. Here we could create from a blank slate.
A: In Sweden a lot has to do with what sort of premises you get. What size it is, the location, and what type of neighbours you have. What you’re allowed to do, legally.
O: Here we could do what we wanted.
H: We have the world’s best neighbours.
O: We have the Ferdinand wine bar, there’s Arnold’s, Coquetel Social and Spy Bar.

The bar scene in Stockholm is very progressive, and it certainly knows what it’s doing. The cornerstones are atmosphere, service, interiors and obviously what is served in the glasses.
O: Just look at your first impression entering a bar. Number one it’s the welcoming. You quickly notice the interiors. And the sound of it. And that’s not just the music. Those are the first impressions. On top of that comes the service and of course what they serve.

Will people stay here for the night, do you think or will they pop by for a drink before heading on?
O: We have been extremely surprised with how long people have stayed.
H: We have had people sitting here for six or seven hours. Many people drop by for one cocktail but stay for three. It’s a great ambience, you want to stay here.

One thing I personally like with Lucy’s Flower Shop is that it’s a bar. It’s not a restaurant with a bar. This is unusual for Sweden, as you typically need all of the restaurant facilities with ventilation and all of the other requirements to gain an alcohol permit. Here they can just rely on the same alcohol permit as Arnold’s and Spy Bar in the same building. Lucy’s do have a bar menu, but there’s no doubt where the focus lies in this little room. They can emulate their favourite bars around the world, from which they have drawn inspiration – Alex mentions Happiness Forgets on Hoxton Square in London and Attaboy, formerly Milk & Honey, on the Lower East Side, New York. Another good thing with having the same alcohol permit as Spy Bar and Arnold’s is that the official opening times of 17-01 aren’t set in stone, they won’t switch on the light and chase their guests out of the door. And something else that differentiates them from the rest of the Stockholm bar scene is their minimalistic way of doing things.
A: Our cocktails don’t rely very much on appearance for example. There’s no smoke, there’s no garnish.
H: We don’t have any garnish on a single cocktail.
O: We’re not alone in working very minimalistically with the servings, there are bars out there in this world that think ‘the right glass for the right drink’ rather than ‘a fun glass for a fun drink’. It does exist, but it’s not the most common thing you see today.

There are already two Lucy’s Flower Shops in existence. One is located in the Bronx in New York, the other in Texas. Both sell flowers. When I park at a seat by the bar, across from Alex, to try their cocktail menu that for now consists of nine creations, he tells me how the name came about.
A: We had a meeting with Vimal Kovacs, the head honcho of restaurant and bar group Stureplansgruppen, who asked us if this was a location we wanted to build a bar in. The space was completely empty. We looked around and pondered the possibilities. When we got back out onto the street I said to Ola ‘we have Ferdinand, the wine bar, restaurant Arnold’s and then Spy Bar – all very hard and masculine. Shouldn’t we name the bar after your daughter, Ola’?

And why Flower Shop?
A: We have been to so many cellar and secret bars around the world that have alluded to this hard and cold… You know, you walk in through an industrial building, through a hidden door.

So you wanted a softer image?
A: We felt that why should one go downstairs and be a bit put off, frightened even? Why couldn’t the first thing that greets you when you come down here be flowers for example? Actually, there is a bar – and I recently found out, it’s apparently well-known but we didn’t know about it – in Argentina [Floreria Atlantico] where you enter into a flower shop and walk through a door with a bar behind it.

There is also a film called Lucy. Scarlett Johansen plays a drug mule who gains psychokinetic abilities when the drugs happen to be absorbed into her bloodstream. In the film the professor Norman, played by Morgan Freeman, says: “The sole purpose of life has been to pass on what was learned. There is no higher purpose.” In the same way I think that Lucy’s, down in the basement at Stureplan, is the result of all that Ola, Alex, Hampus and Linn have learned along the way. Now they pass it on, to you, over the bar counter at Lucy’s Flower Shop. There is no higher purpose.