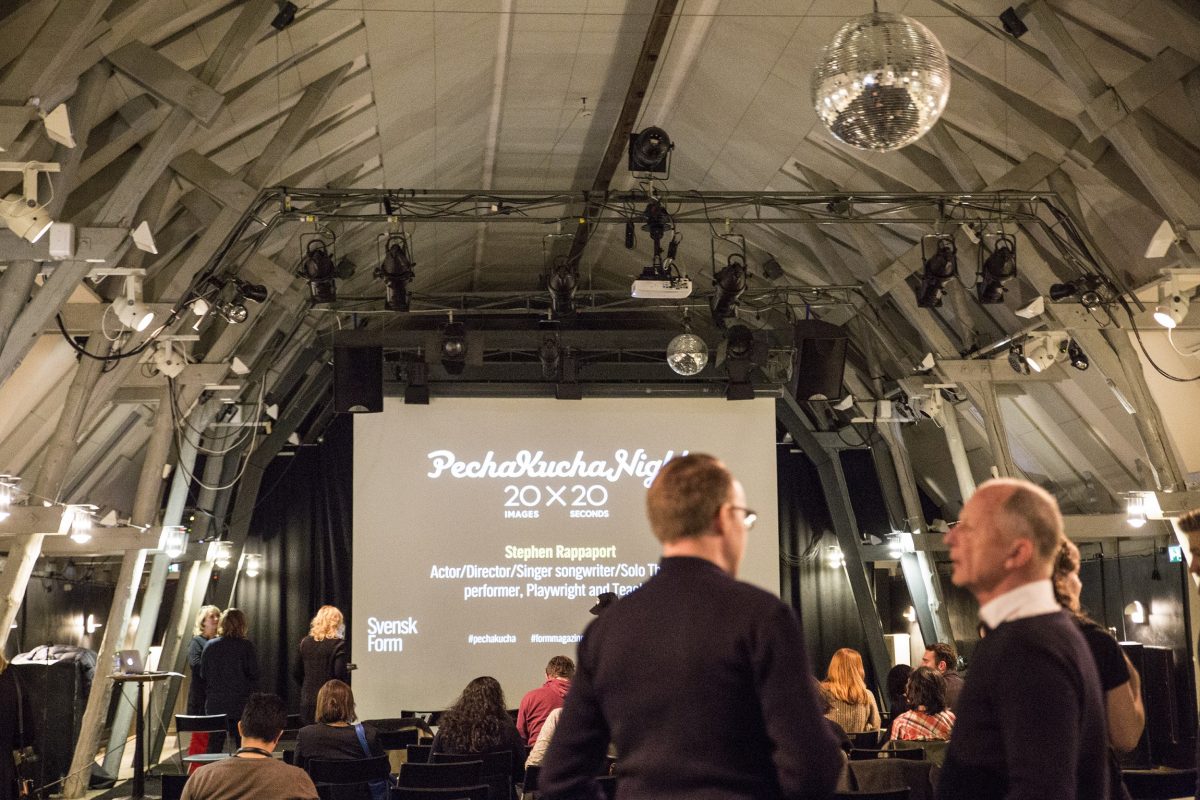 The idea of Pecha Kucha Nights was conceived in 2003, as a place for young designers and artists to meet, network, and show their work in public. The quick-fire talks cut through the small talk and get right to the heart of fascinating stories. Stockholm sees its 63rd edition in May.

It has now been 15 years since the Pecha Kucha concept first saw the light of day in Tokyo, created by the architects Astrid Klein and Mark Dytham. The concept was fairly simple; a platform where creatives involved in design and architecture could showcase their work and ideas in a relaxed and non-prohibitive environment. Fast-paced presentations consist of 20 slides displayed for 20 seconds each, adding up to a total presentation length of six minutes and 40 seconds – a format that keeps it concise and allows for events with multiple speakers. From its humble beginnings in Tokyo, the now patented format spread and has embarked on a journey that has taken it to over 900 cities around the world. The Stockholm Pecha Kucha nights have been some of most popular, with over 60 dates in the city so far.

Originally overseen by Svensk Form, they have now stepped back into a co-producing role while New Zealand-born Leigh Fitzjames has been in charge of the events since December. The talks move between different Stockholm venues, and shine the light on its many innovative areas. The upcoming event in May will be Fitzjames’ fourth. She arrived in Sweden a little over a year ago and “instantly fell in love with the natural beauty of Stockholm and its people”. Inspired by a passion for telling stories, she began to co-produce Pecha Kucha with Svensk Form, to run the talks as an outlet for a diverse, creative community. Prior to living in Stockholm, Leigh spent five years in New York City. In 2011 she founded Human Storyteller, a transmedia production company that creates and promotes film, music, advertising and events.

Why did you want to get involved in the Pecha Kucha nights here?

I’m passionate about sharing ideas. I love the format, it’s so accessible and my aim is to bring in creative speakers from all sorts of disciplines.

You have been working with this for a few months now, what do you hope to achieve?

When I came onboard, I had two prerogatives. One was that I wanted to extend the speakers through more disciplines. It was started by architects and has mainly been about design and architecture, but I’d like to extend it to filmmakers, musicians and writers to really broaden who could be involved.

Plus I wanted to decentralize the event and take it to neighbourhoods that don’t have that much traffic. We took it out to Sickla. We took it out to Subtopia. And the idea is to put the spotlight on the respective areas. The upcoming event in May is in Hammarby Sjöstad, at Goto 10, a free co-working space. It’s one of the smaller venues we have used, we can have about 80 people there. The reason we’re going there is it’s an innovative space. We want to take Pecha Kucha to places with a lot of innovation.

What’s the process for selecting speakers? Do you seek out interesting people yourself or do people reach out to you?

My primary focus is to find people who have a unique voice – I’m here to show off people who dare to say or do what hasn’t been done before. Whether I’m looking online, at events, in conversations – it’s a 24/7 research project! The beauty of the Pecha Kucha format is that speakers can come from any creative field, and don’t have to have a professional background as a public speaker in order to captivate our audiences. Often speakers self submit and that is very welcome too.

How many presentations do you typically have on a Pecha Kucha night?

It really depends on the venue, but usually between five and ten speakers.

Do you usually have a theme for speakers? And are there specific criteria of what you can talk about?

We don’t have a theme for every event. What we try to focus on is getting a mix, diversity in both industry and demographic representation. We’re pretty open to speakers, but we don’t want to have a sales pitch. That’s the main criteria. And we don’t want to promote negativity, don’t want people to point fingers. But we don’t have any strict guidelines, apart from the format.

The next instalment goes ahead on May 14 in Hammarby Sjöstad. Entry is free.