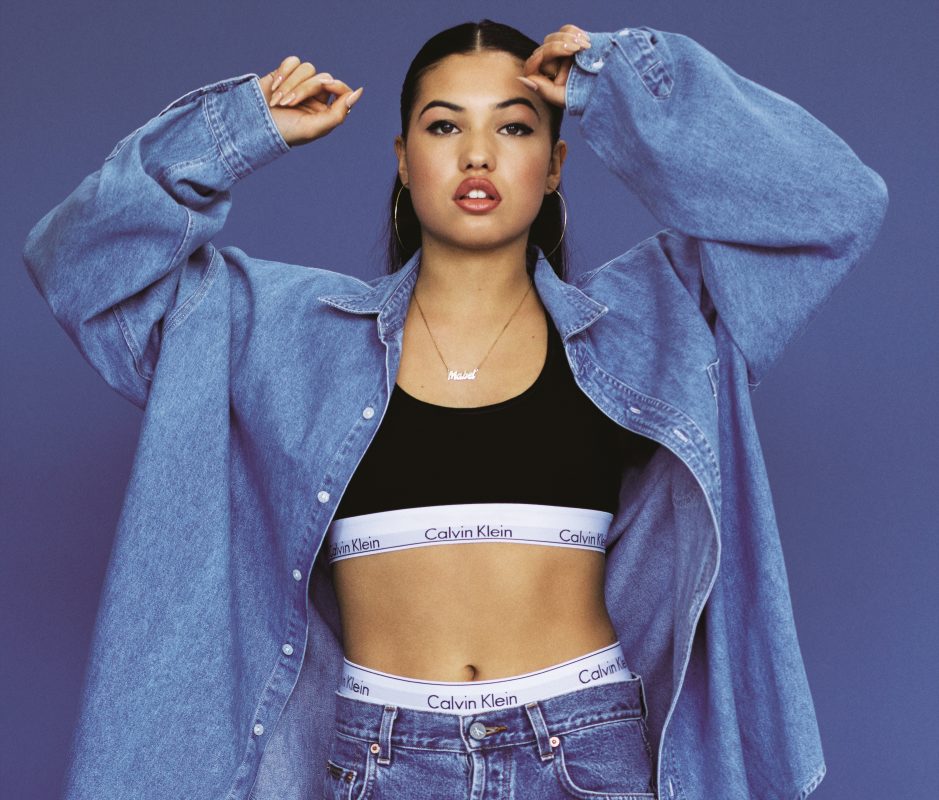 For the children of famous parents who operate in the same field, life can be difficult. Their parents’ shadow can fall long, and they can spend their entire career struggling to get through an article without their parents’ name popping up. Generally, these musicians need to eventually carve a space for themselves where they’re respected for their own work, and not just their ancestry. But this is a tough task, and for every Jeff Buckley, there’s a mob of Beatles kids. Luckily, RnB singer Mabel has already made significant inroads into carving out her own space and distinctive musical identity. Released about a year ago, her debut single Know Me Better has since racked over a million Spotify plays, and her music has put her in the pages of Vogue, I-D and other style and music magazines, as well as this issue of Totally Stockholm. So when she was in town to play the Green Door Project club night in Nacka, we caught up with her to find out more.
Mabel’s family has a pretty strong claim to music royalty status. She is the daughter of Neneh Cherry and Cameron McVey, the British producer and musician who has worked with the likes of Massive Attack, Portishead and All Saints. Open up that family background even more, and you’ll find her half-brother Marlon Roudette, sister Tyson (Panes), step-grandfather, jazz trumpeter Don Cherry, her aunt Titiyo and uncle, Eagle Eye Cherry. That family background influenced Mabel’s own steps into music as a career. And it all seemed entirely natural to her.

“I think I didn’t really think it was strange or different to any other families growing up. When you’re a kid you just think everybody’s life is like this. But yeah, when I was a kid I was constantly surrounded by creative people. I think creative people are quite emotional people, which I definitely was from a young age, and my parents and other people around me just taught me that you can use that. If it’s sadness, pain or frustration, you can use it to make things that are nice and beautiful. I learned that from a young age. I spent a lot of time on my own as a kid, didn’t really buy into other kids. I taught myself to read and write when I was really young, and I would just write stuff. I started playing the piano, and I would just connect those things. My parents were always really supportive in showing me new tools, my whole life really”.

However, the pressure of her family’s reputation, and other people’s interpretation of its role in her career, weighed heavily on Mabel. Initially, she thought she would skip the limelight and follow her father into a more background role, focussing on production and songwriting rather than performing herself: “It was really hard. I was worried what other people would think. That people were going to think that I’d used my parents to get to where I was, that maybe they were writing for me or I was writing with them. That my dad had produced it, when in reality he had nothing to do with it. That I didn’t have any talent of my own. I know I do that with people’s kids, that I just assume that about them. And then I catch myself doing it, and go ‘Wait, you’re that person! You’re somebody’s daughter!’”.
With that in mind, she thought her career might be “maybe more what my dad does. Production and songwriting, more behind the scenes. I studied here at Rytmus, and studied singer-songwriting. I got really into the construction of songs, breaking things down and writing shit down. It was there I decided that this was definitely what I wanted to do, that I wanted to move to London and be a songwriter”. Her debut single, the slinky but vulnerable RnB track Know Me Better, made her finally decide to front the music herself.
“I wrote Know Me Better”, she says “and I decided that I actually wanted to put it out as my music and see what happens. Just a few months after that I decided to put it on Soundcloud and it got blogged a lot, then it got number one on Hype Machine, then Annie Mac made it BBC Radio One’s track of the week, and then I signed a record deal. That’s literally what happened.”

Know Me Better was created with a spark of inspiration from a certain hiphop artist. “It has a Mos Def sample in it (from the Mos Def track Summertime, from his Mos Definite mixtape), which we couldn’t clear for Spotify but it’s on the Soundcloud version. I found it on the B-side of a Mos Def record, it’s just a capella. And he says ‘get close ma, know me better’. And when I heard that first, I just thought ‘Shit! That’s really good!’. I was just listening to that and wondering if I wanted to be an artist or a songwriter. And it’s kind of about baring yourself to people and saying, ‘Look, this is me, here I am’. So it started with the Mos Def sample. And then it happened very quickly”.

After growing up in Stockholm, and spending three of her teenage years studying at Rytmus, she moved to London at 18 to continue working on her music. And the buzz of Britain’s capital, and the culture contained within it, provided fresh inspiration for the budding musician.
“I spent a lot of time just listening to things, and figuring shit out. But it wasn’t until I moved to London and started listening to a lot of grime and stuff that I was like ‘Actually, I’m not just Swedish’. I had lived here for a while, but I’m English as well. It sounds cheesy, but I feel international, and I don’t have to belong to [just] one of those things. So I could take some of the stuff that I learned at school, and mix it with the exciting stuff happening in London, like grime, which had just made a massive comeback. What we have to say with RnB and hiphop now can totally compete with what America is doing, for the first time in a long time. Moving to London was very difficult. It’s a very big, stressful city that moves at an immense pace, and when you’re not in that pace it feels like instead of being in the stream, you’re just bumping into people all the time, getting on the wrong trains and thinking ‘Oh god!’. But I found my way and found my way into groups of young people, like-minded people. All doing different things, but still creating, starting companies. And I think the reason why young people there are so creative is because it is so difficult. There’s 10-15.000 other people, so I have to be the best.”

Her most recent single, Thinking Of You, has put her on a whole new level, but Mabel’s ambition means that even that won’t satisfy her.
“I’m so ambitious so for me it’s never enough. Every time I reach a goal, the goalposts just move, so I’m just constantly going. But I love it. Thinking Of You did amazing things for me, it’s like I was having my Mariah Carey moment when I was writing it. It was fun.”
And for 2017, her sights are firmly set on an album: “I personally love albums. I grew up listening to all the albums that my mum listened to, like *Innervisions* by Stevie Wonder and Minnie Riperton’s *Adventures in Paradise*. Albums with things like interludes, that really tell a story from beginning to end. So I definitely want to do that, and that’s an aim for 2017. I also want to communicate with people online in a more casual way, so I want to start dropping things more often. That’s definitely a goal.”
Based on her progress so far, you’d bank on her to hit those goals very, very soon.