Raindear: “I Still Think Of Music As Art” 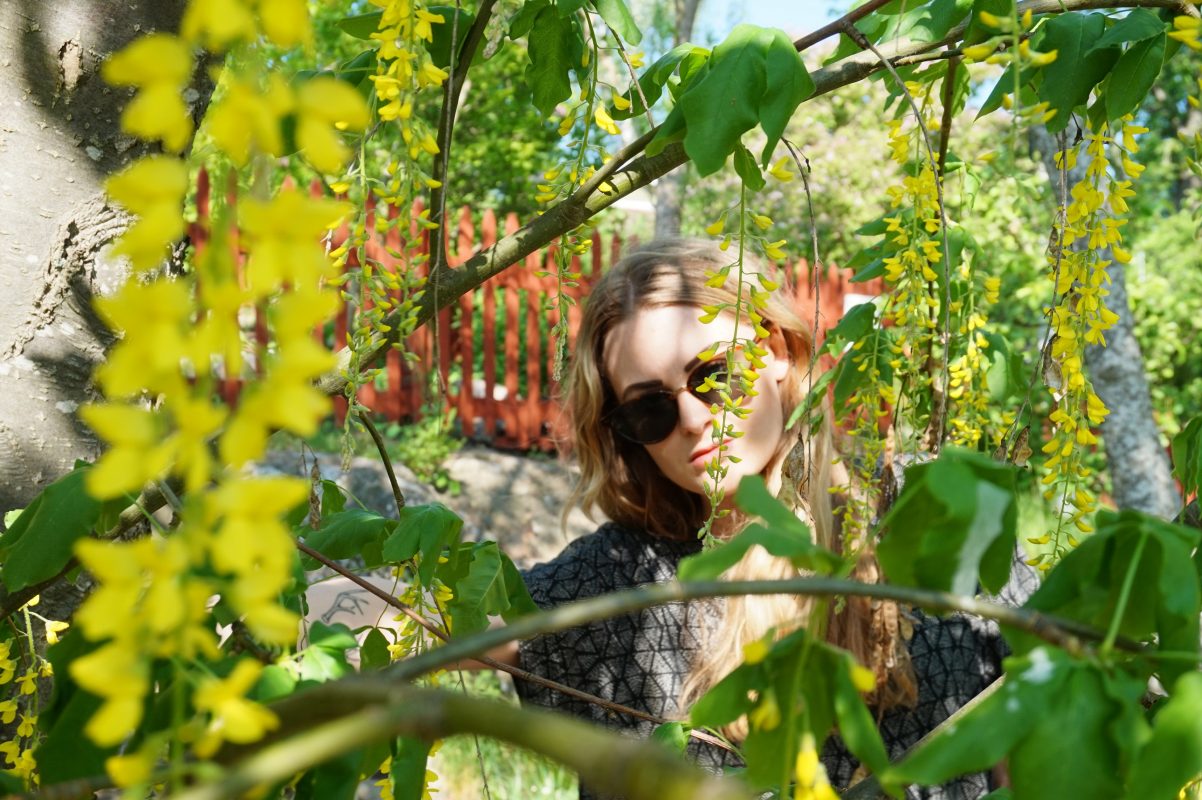 Raindear is the musical baby of Rebecca Bergcrantz, whose debut album Embers, released in 2016, showcased her talent for theatrical, dramatic pop music. A couple years down the line and now based in Stockholm (she’s originally from Malmö), she’s back with a follow-up, Skies To My Name, an album that mixes her usual style with influences from the world of techno and dance music.

So, to start things off, when did this album start coming together? Embers came out in 2016, and then the first single from this came out the year after, Diamonds In My Chest, right? So the release process has been going on for over a year, when would you say the start point was?

In a way, Diamonds. But I didn’t really see a full album coming together at that point. It was more that when I started to pick songs for the album that I felt that Diamonds deserved to be on it as well. It wasn’t like I had an album in view [at that time]. Then last spring, I tried to collect my thoughts and think of an album, so I collected the songs sketches I had, threw some away, wrote some new ones, that process started like spring.

What would you say are the major differences between Embers and Skies To My Name?
Embers is more boho, and this is more ravey I think. Some songs are kind of experimental and long and hippy-ish as well on Skies I guess, but the singles are more electro-pop, almost a bit dance-suitable. I wouldn’t put it on at a rave, but I have been inspired by rave music, and you can hear that in my pop sound. I don’t think of it as dance music, because it’s too slow still, but you can hear elements [of dance music] I’ve been inspired by. Everyone goes through periods where they listen to different music, and over the last couple of years I’ve been influenced more by techno. I think it’s quirkier as well, done with a little more of a twinkle in the eye. In one song I have a karate yell sampled as a snare sound and I’m picturing small warriors floating around in the sky. It’s more playful. But it’s still my sound, you never vary as much as you think.

You mentioned in an earlier interview that you felt you had become a better producer since the last record?
Yes, definitely. I’ve become a better songwriter as well, because the more you do something the more you develop. But sometimes being a little less used to something means your creativity is more open – so I’m not saying it’s always better to be better at producing and songwriting, but it helps me come to the point quicker. But I’m not saying they’re necessarily more interesting songs, because it’s more about the vibe anyway. The songs I wrote years ago are not necessary worse than the ones I’m writing now, because it was true and real then. Maybe I can refine my ideas better now.

It’s interesting that you talk about more of a rave influence on this one, because that’s also what I picked up on. To me, it sounds a little bit less like conventionally-written pop, and more dancey on this record. That kick-drum sound is all over it, and it feels in places that you’re pulling your vocals back, and letting the instrumentals run the song. Like on Wallpaper and Silences, there’s a lot of letting the beat speak for itself and not needing a vocal melody on everything. You mentioned Grimes as an influences, and bits reminded me of the back half of Realiti, where she just rides out the beat.
She’s definitely my idol right now and has been for a while. Maybe if you think of it as party music, the vibe is more of an afterparty when people are a little more tired. When they want to slow down, but still want some excitement. Still a beat, because it’s not over yet, but we’re just taking it a little bit slower.

Did you focus a lot on getting the sonic textures right on this record? Focusing on getting the soundscapes than super-conventional songwriting?
I can’t help myself from being super-nerdy with the sound. But at the same time, toplines are really important, but I don’t think I agree with other people in the pop world on what a good topline is. I don’t need it to be in your face, I listen to toplines with more ‘jazzy’ ears. The singles are more vocal-focused, but the album tracks you mentioned are sort of half-instrumentals and half vocals.

One of the tracks that stood out for me was Your Vibe, I really liked that dark, distorted chorus it has, could you tell us a little more about that one?
It’s one of my newest ones, and I think it probably defines my new sounds, what my next album is going to go towards. It’s kind of an angry song. It’s actually kind of feminist subject matter, though it’s more cryptic. I didn’t want too much melody from the vocals on the chorus, because there’s that siren sound from the synth, and I wanted that to be the focus. So the melody is more talky.

Would you say you generally write your lyrics in that kind of abstract way? Where the message isn’t necessarily super clear? The lyrics tend to be a bit cryptic?
Yeah, it’s not like I’m taking the pen, or well, the keyboard. There’s generally one sentence I think is strong, and then it’s built from there. It’s like a puzzle, you bit by bit fill it in till it makes sense. But for a long of people, it’s never going to make sense at all, it’s more metaphorical. One of my favourite bands is Radiohead, and I don’t understand what Thom Yorke singing, but I don’t feel it’s so hard to understand my lyrics, though I guess I don’t really know.

You had a song recorded with an orchestra last year, and you said it was a really meaningful experience? I was wondering if you could tell us a little more about that one?
It was Diamonds In My Chest. It was actually a really nice collaboration with my mum, who is a classical composer, and she set this song up with an orchestra, and it’s like a dream to do that with one of your songs. It’s not actually been released yet, but maybe it will be a good thing to release after the record. She has said [she wanted to orchestrate a song] for many years, but she’s always busy, so it was only now she could do it. So she had the pitch ready for the orchestra, and they thought it was a cool idea. It’s something she’s been thinking about since I started writing songs. So that’s a luxury, to have a parent who can do that. She asked me which song I preferred, and for a while I thought about Silence, but then I decided to take a single which is strong, as I thought that would be interesting. Diamonds is really hard to sing, and the vocals are so produced, so when you do it live it’s tough. So I didn’t do myself any favours when I picked that, because when I was tracking the vocals I thought ‘this is horrible!’ But I managed in the end. I just had to warm up a lot. But it ended up cool, she picked up the beat bits from Diamonds and made them orchestral. She’s brilliant, my mum.

I read an old interview of yours when you spoke about the music scene in Sweden, and the lack of space for artists that operate in what you might call alternative genres, that operate outside of the factory pop scene. So here everyone that does something outside of that really mainstream New Music Friday sound, those people are struggling for the same limited space, which you can especially see with all the venues closing and shit. So how do you, as an artist, combat that? How do you try and survive in that environment? Do you have to keep your mentality a little more international, and think about how people consume music abroad? You talked about bands like Little Dragon, they broke internationally?
It’s not the same style, but I would say my music is kind of in the same universe as Little Dragon, Niki & The Dove, The Knife, bands like that, and those bands would never have become anything without international success, because Sweden was the last place to realise how big they are. After they’ve been nominated for an American Grammy. Here, it’s so focused on the commercial pop scene, which makes sense because so much big international commercial pop comes here. So that’s the heritage and it makes sense, nothing against that except that I’m against capitalism and that [capitalism] is kind of a weird thing to combine with art. I still think of music as art, and some of these people think of it more as product, that’s their choice but I think it’s boring. But I think I wouldn’t have a chance, if I didn’t focus a bit more internationally. I’m based here, and I have some support here, but more internationally. But I think it will work more here if I build it up in other places first, it’s knocking on open doors instead of closed ones. But it’s all a bit spread out, so it’s weird when you play a gig, because you have fans there, there, there, so where are you going to place a show? But I think I have the right mentality, and you slowly see results. I’ve never wanted to be an artist where people just like a song and add it onto a playlist. I want to be someone where they follow all of me, the visual concept and everything. I have real fans now, and that means more than anything. That’s the thing that keeps you moving on. If I have a million streams because I was on a playlist, will that fill a show? Probably not, but if I have fans here and there, that’s what fills a live gig.

You described the album as ‘a testament to your twenties’. Is that something you realised when it was done and you looked back on it, and were like ‘oh, this represents a chapter of my life’?
Definitely. I always write about life and what you’ve learned so far. I’m older and wiser now, I’m 29, and those years of being twenty-something are fun, but also really annoying. You’ve just become an adult, you have to form a career, there are so many things. Now I’ve done all these things, and I’ve see with perspective, and it’s such a nice feeling. Now with the album out, it’s kind of symbolic, and now I’m leaving them and it’s the next chapter.

Skies To My Name is out now on Vanguard Music Boulevard.