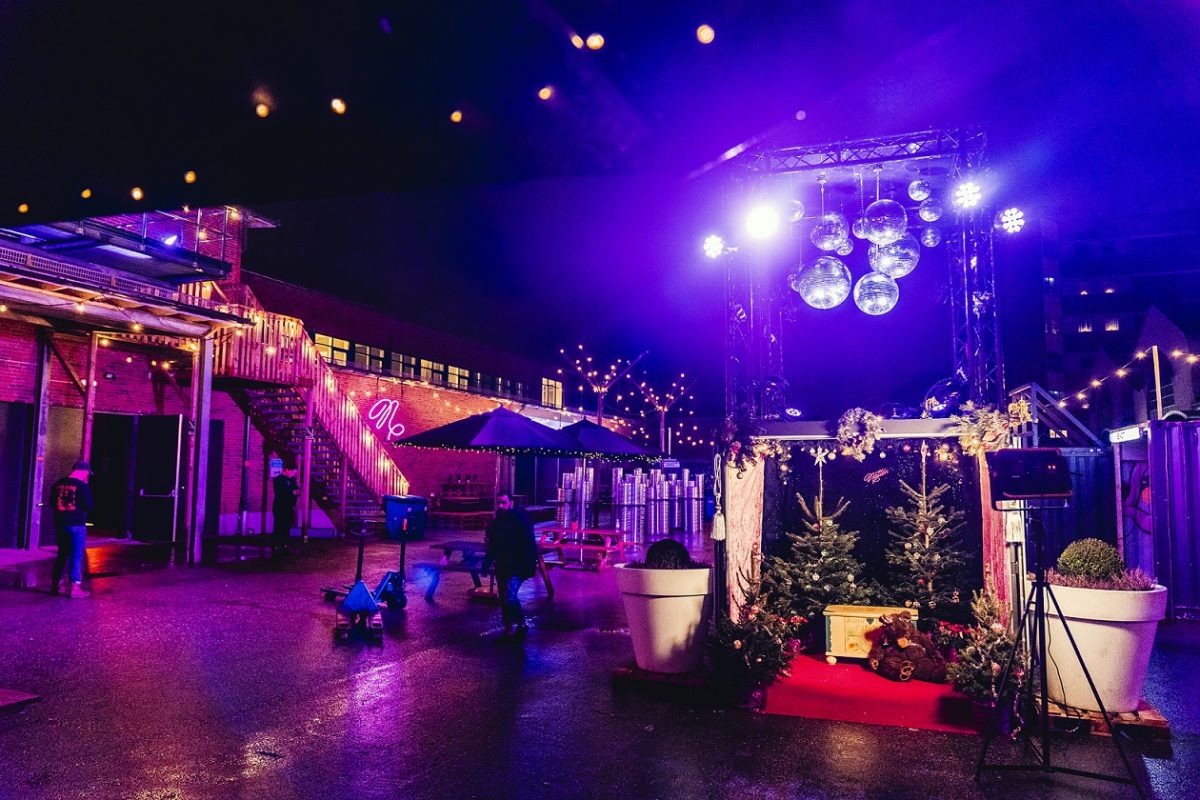 Nobelberget left us at the start of the year, with the venue’s occupants forced to flee when their contract ran out and the building was lined up for demolition, but by the year’s close it’s found its successor. The gang behind Nobelberget has regrouped and are now at the helm of Fållan, a new venue in Slakthusområdet. A former food processing building, Fållan is now home to two stages, several bars and even an outdoor food park, so we spoke to Operations Manager Thea Mårdbrant to find out more.

You knew from the beginning of Nobelberget that it was going to go at some point. So how long have the plans for a replacement been in place?

I think it came up maybe two years after we had started Nobelberget. When we first started off at Nobelberget, the initial plan was to do one event which turned out to be a success, so we got permits to do a series of mini festivals, then we went on to get one-year-permit extensions at the time. In the end we ended up being there for four years in total. So I think two years into that period, Stockholms Stad and Atrium Ljungberg and ourselves all had a big interest in keeping the project going. So from that, the seed was born. Fållan is the same-ish kind of project, we have this space until 2023. After that the plan is to find a permanent space around here.

In more concrete terms, at what point did you start looking for a new venue?
We were talking about this yesterday actually, it was a bit over one year ago that we started looking for new spaces, and we first set foot in this building about one year ago today.

So what do you have for facilities here?
Fållan has capacity to hold 2300 people downstairs. It’s divided between two separate stages – one that can fit about 1900 people for a concert event, and the other maybe 300-400. The smaller space is called Lilla Fållan, the plan here is to do smaller gigs with up-and-coming artists, up-and-coming clubs and so on. We have a few of those coming up later this spring, and we’re hoping to do more of them in the future. Stora Fållan will host bigger gigs, markets, stage art gigs, festivals and clubs. We also have a cocktail bar, a beer bar called Brutal Bar which has 14 different kinds of beer, a lot of craft beers, and a natural wine bar. The natural wine bar is outside, at our outdoor area we like to call Fållan Park which we think we’ll be great for spring. We also have five converted shipping container street food kitchens, one with a tiny restaurant inside.

So what can we expect from Fållan Park when it opens fully?
Fållan Park is our take on a park, our outdoor courtyard area laced with converted shipping containers, cosy lighting and food and beverage selections to fit the season. The plan is to have it up and running all year ‘round, but as we can see today, the first snow has fallen and it’s looking a little crisp out there. The bigger plan is to have reoccurring food and drinks markets and festivals there, and of hopefully a couple of day time music gigs as well.

What kind of cultural profile do you want Fållan to have? Is the plan to be like Nobelberget, more ambitious than Nobelberget?
I think our values and morals are the same as Nobelberget, everyone is welcome and we want it to be a warm and hearty place. We also want it to be a place that reaches out to all different kinds of subcultures, even those that us, the folks behind Fållan, might not have a close connection to. Nobelberget had such legs when it came to that, we had external promoters booking artists and running clubs, and that reached into a different types of subculture, some artists we’d never heard of before selling out shows in a matter of days. I loved that! So we hope that Fållan will be a space for everyone I’d say. All different types of music, genres, foods and culture.

So you’re also planning to give space to external bookers from different communities, is that the plan?
Yes, absolutely. We work closely with both the established booking agencies, but also smaller up-and-coming promoters and first-time organisers who might not have done anything of this capacity before. We did a lot of gigs like that at Nobelberget, and it’s really nice to give the next generation promoters a platform as well. To me, Nobelberget was proof that you can do a lot with a just a little time. But it’s no one person’s show, the combination of people from all paths in life that we had the opportunity to work with at Nobelberget during our time there was what gave the place its character and identity.

So it was kind of like you were learning the capacity of how it worked?
Yes, exactly. And now that we have that with us, it’s easier to get a feel and picture of what kind of place Fållan can be from the get-go.

It’s something you guys already know from Nobelberget, but what are the challenges of having a venue that’s a little outside the centre? How do you work with that and how do you make it work?
I think there are challenges, but there are also upsides. At Nobelberget, we didn’t have any close neighbours for one. When we first moved into Nobelberget, it was really hard getting people to come out to Sickla, because no-one had heard of it as a club or gig destination. After a while, people caught onto it more, and what we learned is that people need a good reason to go outside the city, or at least Stockholmers do. So we learned that bigger names and artists were a necessity, to get the place running. Here, in Slakthusområdet, people already know it as an event and club area. So I think it will be easier here, but I’m sure there will be challenges as well.

I guess to draw people out here, you have to put on a full-night-concept? You can’t really just drop in for one band or one show?
Yes, we aim to make every event something special to get people to come here.

I guess at least you have the tunnelbana, which you didn’t have at Nobelberget? It’s easier than getting the bus back from Sickla at 03:00?
Absolutely, it’s such a luxury! [laughs] But I also think when you are a little outside the city, you can be more creative with the spaces you have. Fållan Park is a great example of something we couldn’t have done inside the city area, there’s not enough space there. Once you’re a little bit outside, you can have more space to play with.

And you don’t have to worry about noise as much? Every bar in the inner city is terrified of noise complaints.
We hope so. We do have neighbours at the backside of the building, so we’re hoping that we can work together to find ways moving forward that works for all parties.

When you take over a building like this, I guess you have a lot of freedom to mould it into the shape you want. So how has that come into play here? What kind of atmosphere and shape are you trying to mould this into?
This building is a former food processing space basically. So what is now four rooms with bars, stages, toilets and wardrobe used to be about fifteen smaller rooms, walk-in freezers, cooling rooms, salting rooms and so on. Not super funky in other words. So we’ve pretty much redone the whole space, with the aim to make Stora Fållan as big and open as possible, and to create an intimate, punky space at Lilla Fållan. When we started we had a pretty clear image of what we wanted to do, and then halfway in we were like “hmm, maybe let’s put the toilets here instead, or the entrance here”, and so on. All of the bigger renovations are out of the way now, but I think we’ll continue to work on the atmosphere and feel of the place almost up until the day that we have to leave. Fållan Park is also a big part of that creative process, that’s still developing.

When you’re making a concert space from scratch, what are your priorities?
A big priority is to maximize the stage view, so that as many people as possible can comfortably see the show. The sound is obviously very important, as well as the logistics around the stage and comfortable guest facilities. It’s also very important to consider the flow and guest patterns of the space, and try to eliminate potential bottlenecks in the areas that will be under high pressure people wise. Lighting is also a big part, not just the stage lights, but also the lighting around the venue to make it feel nice and safe for guests. And the balance of building sturdy instalments but at the same time keeping a flexibility around the venue to be able to cater for all kinds of gigs and events. It’s going to be super interesting to see the place in action for the first time, and to see the space with people in it, how they’re going to be moving around the space and their reactions. You have a picture of it in your head, but once you open the doors it rarely turns out the way you expect it to.

What kind of range of events do you want to have here, especially pushing into 2020?
I think the live music scene in Stockholm is really hungry for a new stage so a lot of live gigs. Also all kinds of clubs, music wise. Additionally, we’ll have a big focus on food and beverages, so food and beverage markets and festivals. Some collaborations with already established food and beverage festivals, and some completely new concepts that we’re working on.