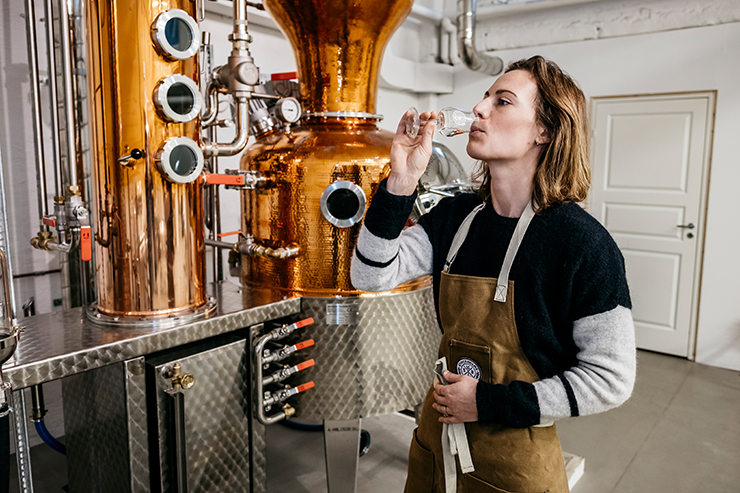 I’m in a former car workshop on Folkungagatan. The exact kind of space you would picture when thinking of a Södermalm micro distillery. I get the red carpet treatment and a walk through of the operation by Anna Wikner, one half of the team behind Stockholm’s first ever city centre gin distillery. She pours me another little glass of her product and looks on, proud as punch, when seeing my reaction.

Luckily, the gin is very good. It probably wouldn’t have made much of a difference though to be honest. Despite the flurry of new craft breweries appearing on the Swedish beer scene, we haven’t seen the same boom in local distilleries as of yet. So when suddenly there’s an artisanal gin, made in an old Jaguar garage at Södermalm, it couldn’t fail, could it?

A pair of engineers with a passion for food and drink, Anna and partner Calle Wikner stumbled upon this career by chance. The seed was sown during the couple’s two-year stint in Vancouver.

“In Vancouver, the place to meet people and to hang out was at the local breweries, but also at the local small distilleries, many focusing on gin, that had started to pop up around the city. This was a new thing for us, as there were no distilleries in Stockholm, and being passionate gin drinkers we dug right in, to gain knowledge on distillation and how to create gin,” she explains.

“A small thought, that we perhaps could start a distillery of our own in Stockholm, planted itself in our minds. That we decided to focus on gin was both based on gin being our absolute favourite liquor, and also the endless possibility for variation due to gin’s broad definition. That the gin market is growing all over the world of course helped too. We bought a small chemistry lab and started distilling all kinds of botanicals that we steeped in vodka, and then slowly started piecing together recipes. We were traveling the Pacific North West a lot, visiting some of the distilleries that had opened there in the last couple of years and almost all of them were open to share and talk about their dos and don’ts. Here we gained a lot of both inspiration and knowledge”.

Anna and Calle actually gave birth to Stockholms Bränneri when still in Vancouver, and just needed to find a suitable space when back in Stockholm: “We wanted a space that was available to the public, as we wanted to create the same open meeting place as the distilleries and breweries provide in Vancouver. Here, there are many requirements and different regulations that made the search harder. After more than 100 visits to different locations, and more than ten months of searching, with hopes going up and down, we finally found the perfect space just around the corner from our apartment here on Södermalm. During the search process we were lucky to bump into Modernist Brewery, and actually ended up sharing the space with them. So now there is gin and beer under the same roof”.

The holy trinity of botanical ingredients in gin are juniper, coriander and angelica root. But the combinations are endless and you could mix and match for years and still come up with new and interesting tastes. I wonder how hard it is to decide which combination to stick with, how to settle on that one particular blend of herbs, spices, flowers and fruits.
“That is tricky. You can continue experimenting forever. And we still are. Our goal was to come up with a gin inspired by our Nordic surroundings and a gin that can stand by itself, but that also works great in the classic gin drinks such as G&T, Negroni, Martini, French 75 and so on. We explored and combined loads of botanicals. Finally, it was actually the gin that we created for our wedding last summer, inspired by the heather meadows out at Torö where the wedding took place, that ended up being Stockholm Bränneri’s signature gin. After the wedding, the heather and elderflower combination was a given. And when adding the rosemary we could sense that this was the track we were going to refine to perfection. But we have kept many of our ideas for future projects. We will not end the exploration. We are super excited for the spring to come and all that nature has to give. We have also some really cool collabs coming”.

The finished product has been given the approval of some of the Stockholm’s best bartenders and has found its way onto the shelves of bars such as Ling Long and Linje Tio. But it began right here on the Eastern parts of Södermalm, at heralded spots Nook and Café Nizza. And now Stockholms Bränneri’s gin is available to order at your local Systembolaget.

The definition of gin is “a sprit which is redistilled in the presence of juniper berries and of other natural botanicals”. Some gins use as few as four ingredients, while others have more than 50. Anna talks us through what their respective ingredients add and where they are sourced from: “Beside the juniper, we use heather flowers for the sweetness and floweriness, and also elderflower that we think makes a great combination. The gin also has lemon zest and coriander seeds for the citrusy notes. We use angelica root to make the different flavours play well together, but also to add the earthy note to the gin. And last, we use rosemary for the herbal end. The neutral grain spirit and all the botanicals are organic, making it an organic gin. After looking for suppliers for a while we found really nice juniper berries from Croatia. When it comes to juniper berries you want them to grow where they get many hours of sunlight, which isn’t possible in Sweden. We do have plans for an all-Swedish gin in the future though. The coriander seeds come from Austria, the elderflower from Bosnia, the angelica root from Belgium and the lemon peel from southern Europe. We grow the rosemary ourselves”.

This fairly new-found love for all things artisanal and locally produced has turned previously stable industries on the head. In response to a declining market share, the giants of the drinks industry have turned to smaller batch, “craft-products” of their own to complement their streamlined mainstream products. But they still have a hard time maintaining their share of the spoils, since the public has decided they want “small” and “local”. And there is plenty to choose from. So after the avalanche of small breweries, will the same thing happen when it comes to distilleries?

“We definitely think that the micro-brewery trend will spill over to distilleries in Sweden too. There is a big appetite here for local and authentic products made by real people and not just large corporations. Also if you believe that Sweden will follow suit with the developments in Europe and US, I think we can expect many new distilleries in the coming years. In the UK more than 100 distilleries have opened up in the past few years, and the gin category have been growing significantly faster than both the beer and wine categories”.

Hernö Gin is the only Swedish gin to really make its mark so far, but Stockholms Bränneri looks to become a success story too and our artisan ginsmiths are doing their bit to promote the whole movement: “Jon at Hernö has been an inspiration and a great help along the way. We consider ourselves partners in educating the Swedish consumers in craft gin, and that there are local alternatives to the larger brands. For example, Hernö is coming to our Stockholm Gin & Beer festival which is taking place at Fåfängan here at Södermalm in April. It is a festival where we are gathering a great group of craft gin and beer producers, as well as DJs, and making this available for everyone.”