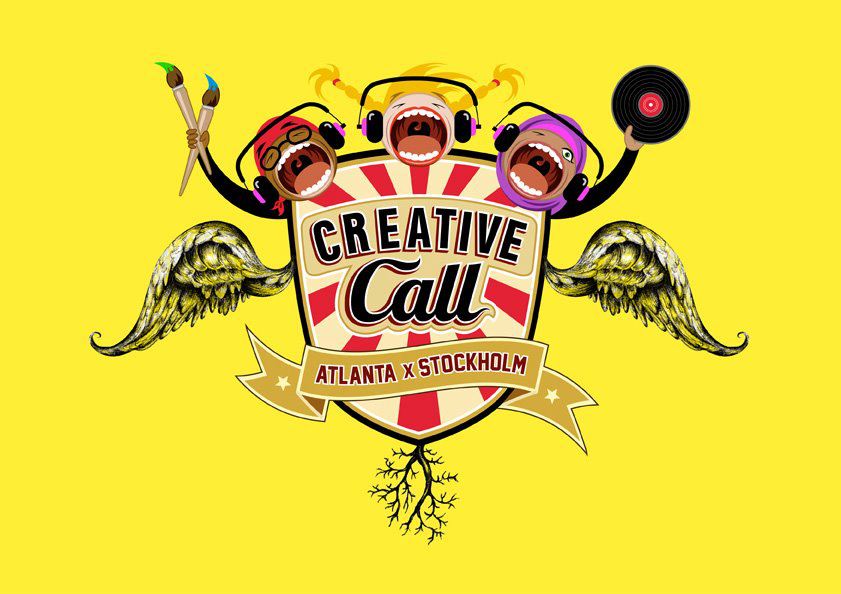 Creative Call festival curator Nicole Smith brings a decade of dedication to the study of art to the ATLxSTHLM festival, which takes place from October 27 to November 4 in Stockholm.

She describes herself as a “southern girl who moved to Stockholm from Atlanta”, she has studied art for the past ten years.  Before she came to Stockholm she had worked as an exhibition coordinator at the High Museum of Art, and earned a masters degree in art history before moving to Stockholm with a view to organizing exhibitions and festivals.  In Sweden, she is the curator for Creative Call: ATLxSTHLM, as well as finishing a masters degree in art curation.

The festival locations are Blå Huset in Tensta, Kulturhuset and Moderna Muséet. All activities are free of charge and open to all ages.  Special guest is Atlanta artist Fahamu Pecou who will perform during the festival.

We asked Nicole a few questions about Atlanta, Stockholm and the art festival.

Why did you move to Stockholm?

I came to Stockholm to earn another masters degree. I am a student inthe international curating art program at Stockholm Univeristy. It’s actually the only program to which I applied. I mean, who can afford to go to school and study art and culture in the U.S.? I know I can’t.

What did people around you think of your move?

I think I shocked my family and friends when I decided to moveto Stockholm. At the time, I only knew one Swedish couple, and they lived in Atlanta. Luckily, they ended up moving back to Stockholm after I moved here.

How do you perceive the differences between Sweden and Stockholm compared to Atlanta and the US?

That is a really difficult and big question to answer, but for starters…NATIONAL HEALTHCARE… and of course the amazing parental leave, free education and good public transportation. I don’t miss the heat or pollution either. Atlanta is miserably hot in the summer and the air feels toxic. But I do miss what you might call “southern hospitality,” just how open and friendly people are there, even amongst strangers. Most Stockholmers are nice as well, but it seems less acceptable to talk to complete strangers.

Then again, maybe I’m just striking up a conversation with the wrong strangers!

Can you explain what “Creative call: ATLxSTHLM” is exactly?

It’s a festival, but also a network of individuals and organizations who came together to create cultural events and activities based on the idea that art and culture can be a tool for empowerment and social change.

And who is Fahamu Pecou?

Fahamu Pecou is an Atlanta painter, video and performance artist whose work deals with black masculinity. Fascinated with branding strategies used in the marketing of hip hop, but also with popular culture’s obsession with celebrity worship, he experiments with these ideas and how they relate to stereotypes of black males.

What is the idea behind the performance in Stockholm?

Creative Call invited Fahamu here to perform his live talk show for the arts, The 15 Project, for the first time outside the U.S. He started the project at the Atlanta Contemporary Center when their staff asked him to help reach out to African-American audiences. He brought a fresh take to the often boring and stale museum programs by creating a talk show inviting local guests and celebrities to casually discuss art and culture with him for 15 minutes each, mixing in entertainment and pop culture as well as fine art. If art and culture institutions in Stockholm aim to reach new audiences and connect to its suburbs, perhaps they can take a cue from Fahamu? Or at least get a glimpse of what has worked through his efforts in the Atlanta art and culture scene.

What is the aim of the project?

The vision behind the overall Creative Call project stems from three main aims: to inspire an art world and creative culture that challenges social and cultural barriers; cultivate young creatives and artists of the future; and build a strong relationship between Sweden and the American South in terms of cultural and social exchanges.

What are your plans for the future?

We hope Creative Call will become an annual or biannual festival that will build lasting bridges between the American South – Atlanta in particular – and Stockholm and its suburbs. This is only the first year, but we are already looking ahead…