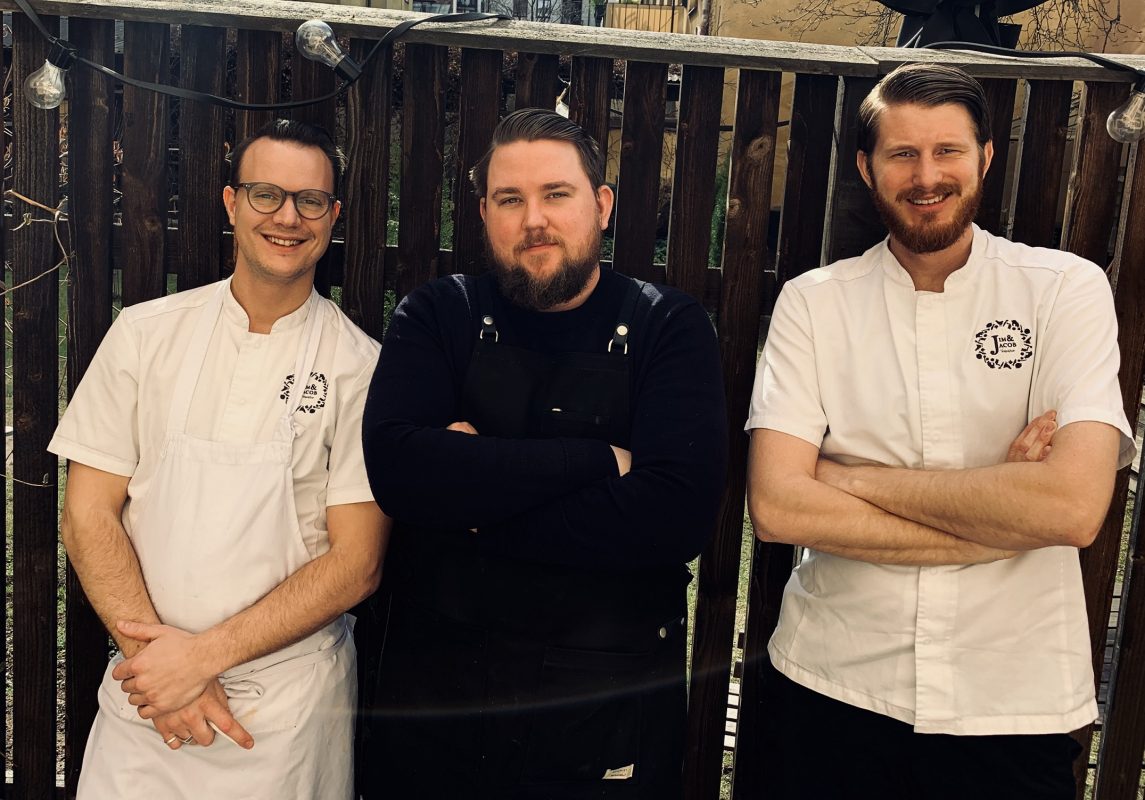 In the premises that previously housed La Bocca, the restaurateurs behind restaurant success Jim & Jacob – Jim Hammargren, Jacob Nermark Hjelm and Jonathan Mattsson – are opening the new venture Copine. Named after the French word for girlfriend, they are focusing on food from the Mediterranean.

“It will be the classic set-up with starters, mains and desserts,” Jim Hammargren explains, and adds that there will also be some smaller dishes in the shape of snacks to eat in the bar or to start with.

So tell me about the signature dishes?
From Surbrunnsgatan we will bring the maize bread, a slider plus a parfait made from duck and cock liver but there will of course be new signature dishes on the menu. It’s still a bit hard to say what will become the biggest successes, but we will have a linguine with zucchini and sea urchin, plus a super simple dish with tomato and mussels. I think those two dishes represent both ourselves and Copine very well.

Jim and Jacob’s eponymous restaurant is not much bigger than the food truck they once had, the truck that burned down and was therefore the reason they to open a restaurant in the first place. The dining room at Copine, on the other hand can house around 50 seated guests. Add to that a bar section for 30 people, three chambre separées and an outdoor terrace and it’s clear that Copine is a far larger venture than the small operation on Surbrunnsgatan.

Your new restaurant is a lot larger than Jim & Jakob on Surbrunnsgatan. How did that influence your thinking during the planning stages?
We have consulted and hired many more professionals this time around, good people to cover the areas where we lack the knowledge. We won’t be able to act as spontaneously as before, the chalkboard [where the menu is written] is gone apart from at the bar. We’re obviously taking a bigger risk and putting more energy and time into marketing. Jacob has a clearer role in the kitchen, Jonathan’s role is on the floor and I’m the CEO with a bigger responsibility over the whole operation.

Apart from size and the French and Mediterranean focus, how does Copine differ from Jim & Jacob?
The philosophy is very similar, it’s supposed to be very clear who is behind the restaurant, but we have a much greater capacity at Copine. We’re putting great effort into the bar here, something non-existent at Jim & Jacob. The food and the cocktails will be a touch more elegant but the overall experience will be relaxed in the same way. The menu is bigger but not so that it’s hard to manage. Plus we are open for lunch and brunch, which is something new for us.

And how will you divide your time in between the two restaurants?

We have the overall responsibility for both places. At the beginning we’ll spend more time at Copine but after the bedding-in period it will be 50-50.