Cocky Cool Kid: Getting To Know The Real Shitkid 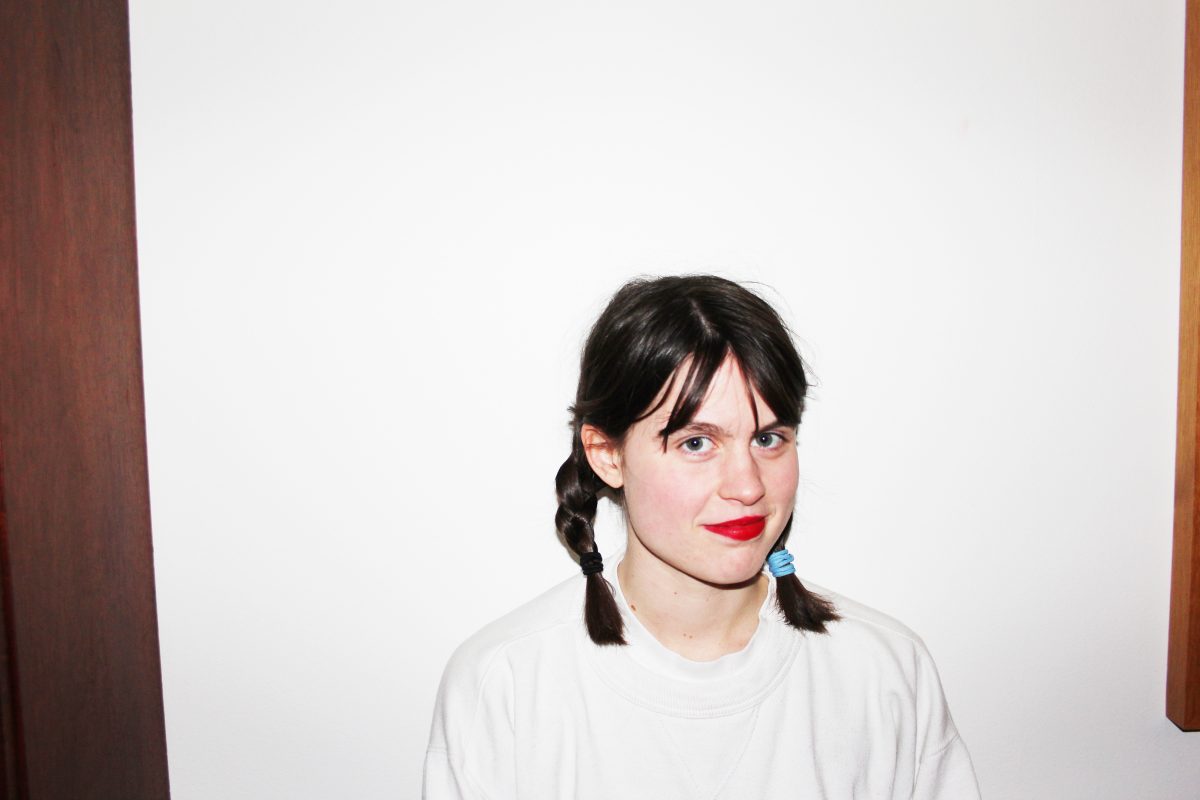 Sweden met Shitkid for the first time before 9am. It’s morning show Gomorron Sverige, and it’s the part of the show where they turn to culture, and ask journalist and writer Annah Björk for the latest music news. She plays them ‘Oh Please Be A Cocky Cool Kid’, Åsa Söderqvist’s debut single, a song which sounds like nothing else out there, a pop song fed through a cracked radiator. The presenter gulps hard, mutters ‘Yep, Shitkid’ and moves the programme along. Shitkid it seems, is not for everyone.

Fortunately, there are an awful lot of people who are in her camp. Ever since Söderqvist popped up in Gothenburg with ‘…Cocky Cool Kid’ and signed to PNKSLM in early 2016, her acid-washed delinquent rock and DIY aesthetic has won her fans in Sweden and beyond. She’s been picked up for features by i-D and The Fader, and slots at Oslo’s by:Larm and Denmark’s SPOT festivals. A couple of EPs later, she’s relocated to Stockholm and is on the brink of releasing her debut full-length album Fish. So we met her to find out all about it.

I think the first thing that hit me about Shitkid when I first heard your music was how solid your creative identity was. A lot of artists are looking for an identity or aren’t quite sure of themselves when they’re starting out, but you seemed to have your identity and image completely figured out and knew exactly what you wanted to do. So I was wondering how you started with Shitkid and how the project came together? You played in other bands before, right?

Yeah, I was in bands before, and I was very shy. I guess that once I had released the first EP, and everything went 100 percent better than I thought [it would], I just felt more sure of it all. That came pretty quick.

But how did the Shitkid project start?

It started with me buying a soundcard, and then I just sat and recorded every night for two months. I had set a release date [for the early songs], and then I released them on a Wednesday. Then it sat on Soundcloud for four months, and nothing really happened. Then I sent them to PNKSLM.

So after playing in bands you decided to start a solo thing?

Yeah, because none of the bands were working, because everybody had jobs and school and stuff, and there wasn’t enough enthusiasm I guess. So I needed to do it myself. Because otherwise nothing would have ever been recorded. We were talking about recording stuff with my other bands, but everybody thought we needed a studio, and other things. It was just too much to handle.

So ‘Oh Please Be A Cocky Cool Kid’ and the other initial songs are on Soundcloud for a while, and then you send them to PNKSLM, and then it all takes off?

I actually put up ‘…Cocky Cool Kid’ after I wrote to PNKSLM, because that one wasn’t supposed to be on the EP. It was supposed to be another project, because it sounded so different. Then we put it on there too.

Do you think your confidence in putting out music and performing has come on a lot since you started with Shitkid?

Yeah, when everything’s going so well and people write good stuff about it, of course that boosts my ego. But I already have a big ego.

I was listening to the album and I think a lot of that shyness and nervous tension is still there, especially in songs like ‘Never Seen A Girl’, the opening one. Do you think people miss that because of the punky Shitkid image, that they don’t listen to the music closely enough and see it there? That it’s not just a punky attitude, that there are other sides there?

No, I think people see that. I guess the first EP only had punky songs, apart from Poobrain. With songs like ‘Poop 1’ and ‘Poop 2’, it’s not really that deep. I think this album has more deep ones. Like ‘Never Seen A Girl’ and others. The earlier stuff was mainly punk rock.

Yeah, I’m still doing the same thing, in Garageband and some stuff. Basically the same way. I had to record the vocals for two of the new songs in my car, because I live with people, and I really hate it if people can hear me when I’m recording from scratch. So I recorded them in a car park. But it’s the same instruments, the same stuff.

A lot of your music is pretty minimalistic, you’ve generally got a basic set-up of guitars, keys, drums and vocals. And that leaves a lot of space there, and I think you use it to put a lot of personality into your music, and you can push and pull the songs more in the direction you want and put your own stamp on them. Is that the way you like to write?

Right now it is, could possibly change. It’s the easiest way for me and it works and it’s fun. Right now when I’m writing new things I like to add on a lot of backing vocals, but other than that I’m kind of happy with the sound.

Do you think the low-key minimalist lets you put more of yourself into it? Because when you listen to one of your songs it doesn’t really sound like anything else. It’s very clear that it’s a Shitkid song.

I guess that’s one of the reasons too that I wouldn’t want to put a bunch of other instruments and stuff into it. I like it, and if I was adding other things I’d have to learn to play them, I’d have to buy more things, I wouldn’t know what to buy. At the moment I can make it [the music] pretty much what I want it to be.

I think part of your appeal is the way you use those instruments, and your vocals too.

You can do a lot of different things with them. I’ve made so many different songs. When I made songs for the Stargaze series [a short film series by Linda Hedström that Söderqvist acted in and soundtracked], I made like several completely different genres. The keyboard is really good, you can do a lot with it. I have one from when I was 12 that I bought for 600 kronor, and I could write a thousand more songs with it. I don’t think they make them anymore, so if it breaks… I should really be sponsored by them so I should get a stack of them, made especially for me.

So you’re a pretty narrative songwriter, your lyrics tend to focus a lot on storytelling and situations. So where do your lyrics come from, how do you put them together?

Well, most of my songs have gotten their lyrics from improvisation. I make the music first and then I improvise the vocals. Usually I have a theme in my head, or something that happened. Then I have to change them because I sang something wrong, or I wanted a different word, or something sounds cheesy. So then I fix them and sing the complete lyric. It usually has a theme, but it’s very random, blah, blah also.

Listening to both the EPs and the album, I would say the biggest difference on the album to the EPs is that the melodies are stronger and catchier. I think ‘Tropics’ is probably the most infectious song you’ve written so far. Was that something you focused on for the writing of the album?

It kind of just becomes what it becomes I guess. All the songs on the album are from different times, when I made the first EP I made a lot of songs that I didn’t use for it. So for the album some are old songs that I just reconstructed and stuff. So all of them are really different. It’s just how it happened over time.

Would you say that as a songwriter you’re someone that prefers to write lots of songs and pick the strongest, or do you prefer to keep songs and then work on them until they turn into what you want them to be?

More the first one. I can’t really keep working on a song for that long, because I grow tired of it. If it doesn’t turn out well immediately then I’m not going to spend more time on it, though then I might find it again a month later and work on it again, and fix a little more with it. The ones I like best are the ones that just happen in one take, like ‘…Cocky Cool Kid’ and ‘Never Seen A Girl’.

So you prefer to work pretty rapidly on projects?

Does that make it a little frustrating when you have to collect them into an album, because then you have to spend time with the same set of songs for longer, and work according to a release schedule and stuff?

Well yeah. Everything I do is kind of quick. And then with the process of mixing and mastering…

It kind of goes outside your own work schedule?

Yeah. But I’m not really a perfectionist. My producer Simon mixes them and I kind of just say yes to everything he does, because I think it works. The only thing is that it’s stressing because I’m usually very quick when I do everything and this process takes time. But it’s also easy for me to let it go and let other people do things to it.

I might always want to move on kind of quickly. I’ve already recorded some new songs, so I might want to make an EP next, or something a little longer. But I’ve already started to record those, and I think they’ll be even better. So yeah, I already want to move on.

Fish is released on PNKSLM on Jun 2. On the same day Shitkid plays at Debaser Strand along with School ’94 and Spice Boys.