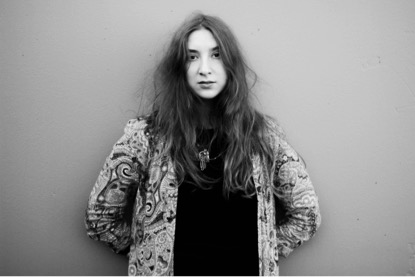 ‘I cut myself loose and got stuck in my head.’

The irony of the first line of Rebecka Rolfart’s debut solo album, ‘First Quarter Moon’, neatly sums up the essence of her band’s name, ‘The Hanged Man’. Far from the morbid image that flashes across your mind’s eye when you first hear the group’s name, ‘The Hanged Man’ actually refers to a Tarot card in which a man hangs upside down in a tree from one foot, smiling contentedly. He represents surrender, contemplation and sacrifice… and if all that seems a bit ethereal, that’s because it is and so is Rebecka Rolfart.

Drawing inspiration from “dark places” like forests, deep oceans and endless galaxies, Rolfart, like some kind of musically talented alchemist, has turned what she describes as a “darkness, that lived deep in my stomach like some kind of monster” into solid gold.

Rolfart’s full-length album ‘First Quarter Moon’ represents a great milestone for the Stockholm- based musician. After having made the difficult decision to leave Swedish post-punk band ‘Vulkano’ in late 2012, ‘First Quarter Moon’ is Rebecka’s- and therefore The Hanged Man’s- first and full-on exposure as a solo artist in the Swedish music scene.

“I quit Vulkano to make art. I thought, ‘this music thing isn’t for me anymore’, but then when I was left with no music I felt like something was missing,” and just like that, The Hanged Man was born.

Writing and recording herself, Rolfart formed the foundations of her solo project with tracks ‘The Island’ and ‘First Time Dreaming’. As the project evolved, so came the time to find a band to help bring The Hanged Man’s songs to life. Much like the flow surrounding the entire project, the band came together organically, emerging slowly from Rebecka’s “many creative friends”. It was not long before Rolfart was reminded of her love of the collaborative process of creating music with others.

“The band is great, everyone has had an influence, it’s so much fun to reflect each other’s ideas and see what we come up with”.

The result is a bold album that slowly draws you in with its heavy, brooding bass lines and psychedelic synth.

The album’s intro track, ‘The Island’, transports you from the shores of placid lakes to dark forests and even into outer space with the help of some awesome delay and phaser effects in ‘Walk No Bones’.

Rolfart’s experience from her time with former bands Those Dancing Days and Vulkano, holds a firm influence throughout the entirety of ‘First Quarter Moon.’ The album presents as a sophisticated narrative of her journey since going solo and despite all of Rebecka’s mention of darkness and dark places, it is impossible to ignore the playfulness in her music.

“I love music, it’s my passion. I don’t think I could do anything else with the same intensity”.

Tucked in the middle of ‘First Quarter Moon’ the album’s only Swedish track ‘Räven’ (The Fox) blends seamlessly with its English counterparts. The album’s synchronicity is due largely, if not entirely, to Rebecka’s song writing process; she does not force anything, rather, she listens. Her music is firmly bound to her emotions and if the two are at odds with one another then it won’t work.

“Sometimes I write in Swedish and then translate to English and the other way around too. I take notes and write poems in my diary in both languages. It’s better not to force anything, I just see what feels right.”

‘First Quarter Moon’ is available on both Spotify and for download on iTunes. Be sure to make it to the album Releasefest at Taverna Brillo on the 12th of November and again to Debaser Strand on December the 12th to see The Hanged Man in all its unearthly serenity LIVE; you will not be disappointed!