Alba August: “How Can One Have Social Anxiety And Also Love To Stand On The Stage?” 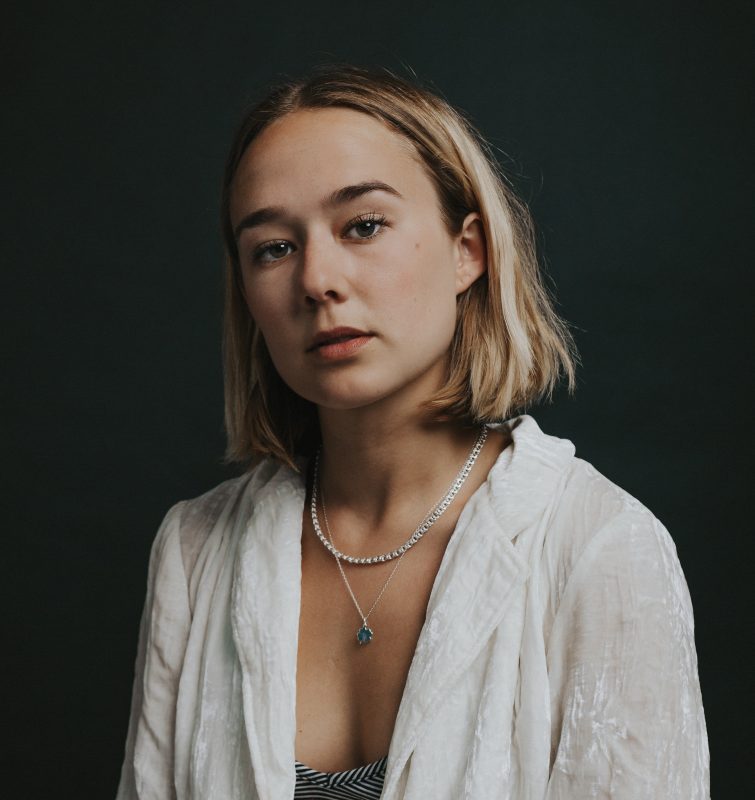 Soon Alba August will be in a cinema near you, and everything seems to indicate she’ll be there to stay. Before the premiere of her film Unga Astrid, we spoke to the rising star about success, social angst and why her dream role is to play a lunatic.

The last year has been intense for Alba August. In May, she had the premiere of Scandinavia’s first Netflix series The Rain, in which she plays the lead role. But even before that, she was chosen as one of ten shooting stars at the Berlin Film Festival for her portrayal of Astrid Lindgren in the new film Unga Astrid.

So how does it feel to be an up-and-coming actress?

“I find myself in a surreal existence, and experience things I could never have dreamed of. It feels quite unreal in a way. But up-and-coming? It’s difficult to relate to success in that way. I try to focus on my work”, she says.

Unga Astrid tells the story of how the sixteen-year-old Astrid Lindgren, who,in an attempt to break from the life as a housewife that loomed in front of her, succeeded in getting an internship at a local newspaper. The film’s conflict starts when she begins an affair with the editor-in-chef, and becomes pregnant.

“Astrid is forced, almost within a day, to become a woman and take serious responsibility for herself and for another person, while following her heart and standing against society’s norms. And…yes…she really did it”.

To play possibly Sweden’s most beloved cultural figure is much more demanding than just learning a few lines. Alba read all of Astrid Lindgren’s books (”And there are a lot”), learned to display an author’s ability with a typewriter, and to avoid any culture clashes during the filming, she and co-star Magnus Krepper visited a farmhouse.

“Now I can watch the film and say: ‘Oh, that’s actually not me’. All those little pieces made it so I became Astrid in a way”.

During the research phase, she read several books that had been written about Astrid Lindgren and other women who lived during the 20s.

“When we showed the film there were many people who came up to me and told me about their mother or relatives who had been through the same thing. Someone’s mother had been raped, which was such a shame [for those around her] that everyone around her acted as if nothing had happened, even when she called for her child. “There is no child”, they said. She ended up in a mental institute and took her own life. My point is that I had never heard of these things, and they are such a big and important part of our history”.

Even during the casting, Alba found that the film’s director, Pernille Fischer Christensen, got something from her which she herself didn’t know was there. The director’s sensitivity brought out more.

“I wanted it so much. It was a dream to be able to work with her on a project like this. Pernille was amazing to work with, we grew together in a way. She could just give me a glance or a clap on the shoulder and I’d know what she wanted”

After a little more coaxing, Alba reveals what her real dream role would be.

“A lunatic, or a psychopath. Who also looks that crazy. Like the Joker, how cool it would be to get to play the Joker? It is so difficult to understand and portray an evil and crazy person, like going in and portraying Hitler or something. It is every actor’s dream to wear a theatrical mask and suit.

The filming of The Rain demanded Alba’s entire person for half a year, and the performance requirements were even more demanding for Unga Astrid. Both through Pernille Fischer Christensen’s ambitious direction, Alba’s own self-demands and the general working demands that come with making a film.

“I was forced to be 100% in the moment, 24 hours a day for two months. No, no, no pauses. Some days I’d have a pain in my stomach and vomit, but you just have to get in with it, because you can never lose a day. It costs too much”.

Among Alba’s own role-models, she loyally names both the film’s director Pernille Fischer Christensen and her co-star Trine Dyrholm.

“Both because she’s a fantastic actress and for her strength and courage. She is so unbelievably fragile, but at the same time so professional. Michelle Williams is brilliant in everything she does, but it’s difficult to say ‘that’s the career I want to have’ – you have your own attributes and conditions you want to use in some way”.

For the first six years of her school life, Alba mostly sat and daydreamed and found it hard to concentrate, but when she began theatre classes, she was motivated for the first time. In high-school it was obvious she would go into theatre.

“I have always felt that I’ve been good at communicating something to a crowd. In private I’m quite self-conscious, and not the one who dominates the whole dinner table with a story. On the stage, there’s a deal with the audience that I’m the one performing and that they are the spectators. I think that’s extremely, extremely stimulating”.

Love of the stage is in her blood. Her father, Bille August, is a director and her mother, Pernille August, is nothing less than one of Sweden’s most famous actresses. She grew up with the latter in Stockholm, spending between film sets and the theatre.

“That’s also something I enjoy, I’ve noticed. To be out and travelling and meeting lots of new people. It’s something I’ve clearly got from my parents, and it’s not something that’s easy to combine with family, but what can you do?”

When Alba put on Ingmar Bergman’s Persona as a final performance at her stage school, she was confronted by her own contradictions.

“In Danish you can say that something ‘ger mening’, but I find it difficult to understand myself as a person, how I can be social and self-conscious simultaneously. How can one have social anxiety and also love to stand on the stage?”

After having prepared for all of July, the filming of the next season of The Rain will begin soon, and in October she’ll play the researcher Jenny Küttim in a film about Thomas Quick.

“It will be a dream to film with Jonas Karlsson and David Dencik. Then I hope I’ll get to do a little theatre in the spring”.

Unga Astrid comes to cinemas in September, and The Rain is currently on Netflix.

This article originally appeared in Nöjesguiden