DJs and Kale Kids As Kale & Crave Opens On Roslagsgatan 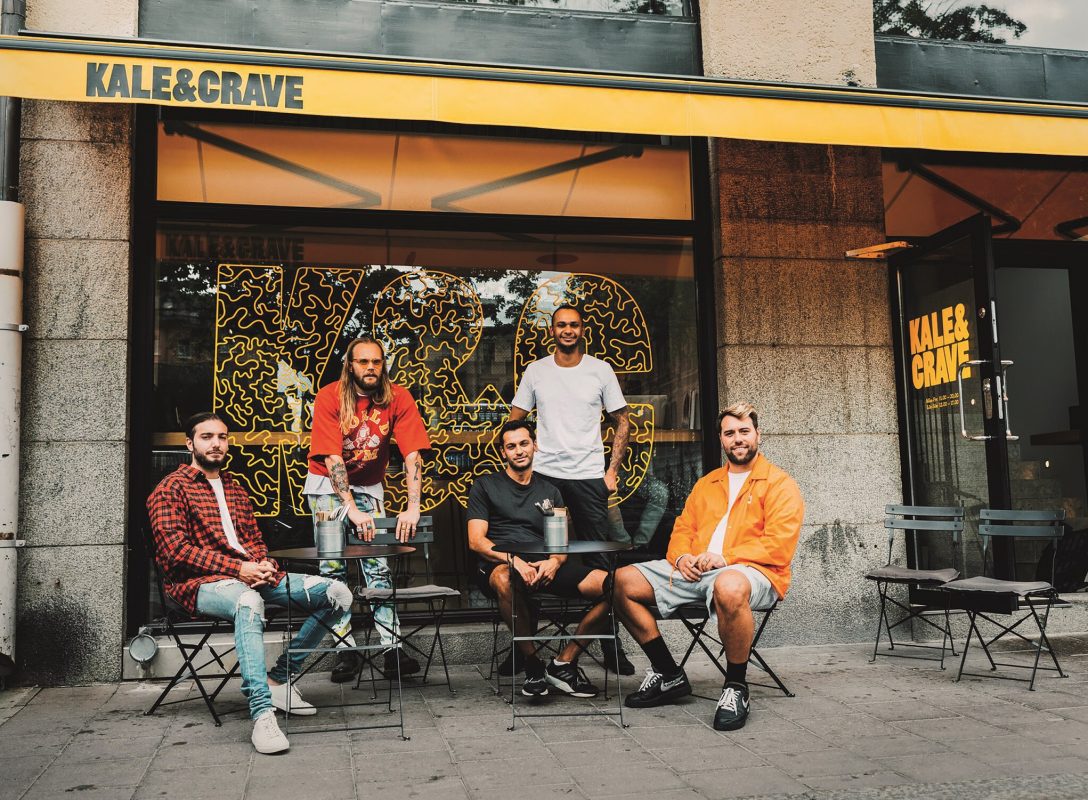 Sebastian Ingrosso, Alesso and Vincent Pontare have, together with their childhood friend Serhan Stojanov and the cook Viktor Hodell, opened kale restaurant Kale & Crave in Treats’ old location on Roslagsgatan. We took a wholesome lunch with the superstars onsite.

There is a white Rolls Royce parked outside Kale & Crave, which is next door to Buco Nero on Roslagsgatan. The venue, which previously housed the beer joint Treat, has now been repainted in “Stockholm white”, and in record time has become a hang-out for diet-conscious musicians, bloggers and sports stars. Outside the restaurant sits the owner of the Rolls, Sebastian Ingrosso, together with the rest of the ownership group. “It began when we met a nutritionist, and soon became obsessed with what food does to your body. When I began to learn more it was the worst wake-up call, and I talked about it constantly when we were out for a long walk. I had thought that a chicken salad from McDonald’s was healthy, but this is healthy”.

I ask Vincent Pontare, who was the gateway to the nutritionist, where the interest in healthy eating initially came from.
“It was through Agnes [Carlsson, his fiancé] that I came into contact with it for the first time, she suggested that I should meet her nutritionist because she thought I would like his ideas. I have always been interested in the body, health and exercise”.

Now you’re pushing it onto others in the same way.
Haha, it gets that way. Luckily, you grow out of that a bit and become a little more chilled. But my family think I’m super boring because I’m always nagging about organic and stuff.

But what have you noticed as the differences since you changed your diets?
Alesso: When you work with music you really notice how food affects your ability and creativity.

You sound like real believers, how disciplined are you?
Ingrosso: That’s what’s so great, after trying all the tips one gets, it has changed at least my life completely. I even see how my parents, who come from an entirely different generation, like it, which is super cool. At the same time, it’s a balance, I’m half-Italian so I can’t live without pasta, and I drink wine on the weekends.

Vincent: The important part is finding a long-term balance, it shouldn’t become psychologically stressful either.
Alesso: It’s rather that when you sometimes treat yourself with something more unhealthy, your body is more prepared for it.

I ask the gang how one goes from having a new-found interest in healthy eating to opening a bar in an old beer lounge.
Alesso: We wanted a place like this ourselves and we couldn’t find it, so we took the matter into our own hands.
Vincent: We practise what we preach. It’s like with music, if one makes music and you like it yourself, therefore the chance that someone else will like it is ten times greater.
Alesso: I also live in the area, and knew that Treats’ contract was close to expiring. Then we asked the building committee if we could take over it, and it went down to a vote between us and one other idea. And they thought we had the best concept.
Ingrosso: I have had restaurants before, and I know that the restaurant business is quite volatile, but this has gone really smoothly actually.

The idea with Kale & Crave is that the dishes should suit all hours of the day. As a lunch or dinner alternative, to take-away or eat there. The menu is seasonal, and will be updated over time. Attracting people to the restaurant, even so soon after the opening, has been the least of their problems.
Ingrosso: A lot of bloggers and such have already come here, and then their followers of course follow after. Even people who live in the area have come in and thanked us because we’ve opened a place like this. We’ve also had a lot of NHL players here.

Will there be more branches?
Ingrosso: I hope so, but we’re going to continue developing this one first.
Alesso: Who knows, we might DJ here some night.

Will you be taking care of catering at Summerburst next year?
Ingrosso: We thought about doing it this year actually! But we opened just two days before Summerburst so Viktor thought it was a bit too soon.